Hunt for inspiration amidst the quaint shophouses of Chinatown, with our guide to the district’s colourful street art. Looking to spruce up your Instagram feed while learning about Singapore’s past? These charming murals by Yip Yew Chong give you the perfect opportunity to snap a selfie. More than just depictions of the past, Yip Yew Chong’s murals are a window into Singapore’s yesteryears, and his passion for painting has garnered him much-deserved attention.

Spend at least half a day exploring this bustling district, and get ready to feast your senses on beautiful art, cultural landmarks, and delicious food. All venues are near Chinatown MRT Station. Your visual adventure begins just outside Chinatown Mass Rapid Transit (MRT) Station. From Exit A, head to the small lane near the Temple Street taxi stand, and across from 1 Mei Heong Yuen Dessert.

You can’t miss this mural—a colourful depiction of how Singapore celebrates the Mid-Autumn Festival, a traditional harvest festival that takes place in September to early October. The artist, Yip Yew Chong, is a prominent member of Singapore’s street art scene, whose works focuses predominantly on nostalgia and our city’s rich cultural heritage.

Iconic Lanterns and Shophouses of Chinatown Continue on to 2 Pagoda Street for a gorgeous photo beneath Chinatown’s iconic lanterns. The distinctive row of heritage shophouses here are hard to miss, with vibrant colours and architecture hearkening back to Singapore’s early days.

While these houses are a blast from the past, they also possess charmingly contemporary design elements—notice the bright yellow flowers painted on the blue shophouse. 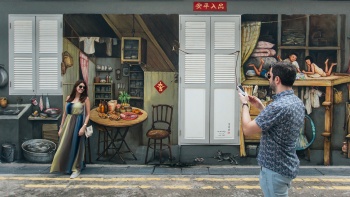 Walk over to 3 30 Smith Street, and you’ll get a glimpse into a humble shophouse from Singapore’s yesteryears. It’s also a fantastic photo opportunity—from the front, you can almost insert yourself into the scene.

This snapshot of Singapore’s earlier days taps on the artist’s memories of his childhood, depicting a familial scene from a traditional Chinese home that exudes warmth and nostalgia.

A stone’s throw away from this immersive mural is the Buddha Tooth Relic Temple & Museum, a truly majestic sight with architecture influenced by China’s Tang Dynasty.

This place of worship occasionally holds classes on meditation and Buddhist traditions, making it a must-visit for the budding scholar of world religions. As you pass by 4 North Bridge Centre  you’ll find a letter writer working hard at his desk, complete with calligraphy tools and freshly-inked couplets hanging to dry.

Drawn based on his experiences of watching these scribes hard at work, Yip Yew Chong has immortalised a scene that’s shaped the Singapore of today.

The letter writer depicted in this mural was an integral member of Singapore’s historical community—individuals like him often provided the only form of communication between Singapore’s Chinese migrants and their families in China. It’s a far cry from the modern-day connectivity that we now experience, and may well inspire you to share some shots of this nostalgic piece with your family and loved ones.

Mural of Bruce Lee by School of Design Bruce Lee makes an appearance along the walls of 5 Chinatown Complex, holding the iconic durian, no less.

Painted by students from the School of Design at Temasek Polytechnic, this cheeky mural enlivens the area with quirky elements that have come to be commonly associated with Singapore’s culture, including the aforementioned king of fruit. Other local touches include an Oriental dragon, curry puffs, and even an ‘I love Singapore’ singlet.

These abstract murals along 6 Keong Saik Road are a perfect complement to the chic cafes and working spaces in the vicinity. The piece is painted by local art duo Ripple Root, whose works are inspired by wildlife and naturalistic imagery.

The splashes of paint are inspired by Peranakan* tiles, enlivening the white walls with vibrant colours. If you’re looking to snap an ‘Outfit of the Day’ (OOTD) shot, this makes for an apt background.

After you’re done, beat the heat with a milkshake or a frozen custard from Shake Shack, and chow down on one of their iconic burgers. The nearby 7 Clan Cafe houses another quirky project by Ripple Root—a swirling botanical mural that perfectly suits the eatery’s focus on clean eating and aromatic teas.

If you’re parched from all the exploring, be sure to head inside for a tipple and brunch favourites like truffle fries and croissants. Alternatively, the nearby rooftop bar at Potato Head offers cocktails and chill tunes, and is a popular weekend hangout. Along the back wall of this ornate temple, you’ll find another creation by Yip Yew Chong. This sprawling, 40-metre-long mural is a moving testament to the lives of our nation’s early Hokkien (a dialect group from south-eastern Fujian in China) immigrants, whose sacrifices greatly shaped modern Singapore.

Take some time to deepen your appreciation of Chinese architecture at 8 Thian Hock Keng Temple. This eminent place of worship was built in 1839, and not a single nail was used in its construction.

Within the temple, you’ll find shrines to deities and prominent figures from Confucianism, Buddhism, Taoism and traditional ancestor worship, making it a great way to learn about the diversity of Chinese spiritual beliefs. If you’re feeling peckish, be sure to venture inside 9 Amoy Street Food Centre and discover Singapore’s delicious hawker fare, before continuing on your hunt for inspiration.

Themed ‘Then & Now’, this whimsical set of paintings is a vibrant tribute by students and staff from Singapore’s Anglo Chinese (ACS) Schools. The schools’ history is indelibly entwined with the Chinatown neighbourhood, with the first of its campuses being established in the vicinity in 1886.

One of the most striking pieces you’ll find here is a five-wall composition showcasing the old ACS shophouse, a Samsui woman, traditional hawkers, and other varied renderings of Singapore’s past. 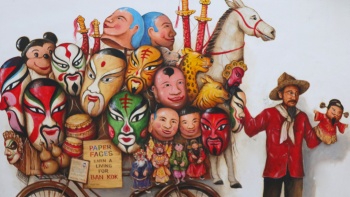 Round off your adventure at 10 Mohammed Ali Lane, where you’ll spot another snapshot of history—a quirky scene of Singapore’s street vendors from our early years of independence in the 1960s.

To gain insights into our city’s yesteryears, observe the detailed renderings of old-school goodies in the Mamak Store (provisions stall). A few steps away, a craftsman presents an amusing assortment of masks and toys, while Samsui women (female migrant workers from Sansui District, China, known for their iconic red headscarves) watch from the sidewalk.

Bars, bites and buzz in Chinatown after dark