This war memorial in Esplanade Park honours the heroes who fought and died during World War I and World War II. Surrounded by lush greenery, The Cenotaph sits at a quiet spot amid the city buzz.

Honouring those who lost their lives in the world wars At nearly 60-feet high, this towering monument honours the fallen during the World Wars.

Names of those who sacrificed their lives in the world wars Visitors can pay their respects to the men who sacrificed their lives in the line of duty. 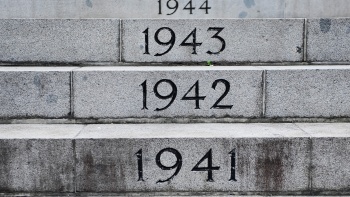 The Cenotaph is a war memorial that honours the brave men who died during World Wars I and II.

Sitting amid the lush Esplanade Park along Connaught Drive, this towering monument—nearly 60-feet high and made from local granite—is in a quiet spot in the Central Business District, away from the buzz of neighbouring streets.

Bronze tablets bear the names of the men from the Straits Settlements who sacrificed their lives in the line of duty. 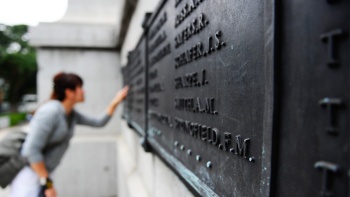 Look at the inscription on the reverse side. Though no names are listed, the simple phrase “They died so we might live” is inscribed in the four main languages: English, Malay, Mandarin and Tamil.

Designed by architect Denis Santry of Swan & McLaren, the Cenotaph was modelled after the 1920 Sir Edwin Lutyens Whitehall Cenotaph in London.

Its foundation stone was laid on 15 November 1920 by the then-Governor of the Straits Settlements, Sir Lawrence Nunns Guillemard, in the presence of M. Georges Clemenceau, Premier of France and Minister of War as well as the General Officer Commanding the Troops, Major-General Sir D.H. Ridout.

The Cenotaph was unveiled on 31 March 1922 by the Prince of Wales, who became King Edward VIII and later, Duke of Windsor.

On 28 December 2010, it was gazetted as a National Monument collectively with two other structures in Esplanade Park, the Lim Bo Seng Memorial and the Tan Kim Seng Fountain.