Singapore, a leading tourism and business hub in Asia, is renowned for having hosted some of the most prestigious global events, from large-scale international conventions to regional security summits.

The city-state’s world-class Meetings, Incentives, Conventions and Exhibitions (MICE) capabilities have earned it international accolades as a top business and MICE destination. Singapore has been ranked the top convention city in Asia-Pacific for the past 16 years (ICCA Global Rankings, 2017), and the top meeting city in Asia 11 times (Union of International Associations Global Rankings 2017).

As one of the world’s safest cities, Singapore is also known for its business efficiency, cleanliness and accessibility. It has both excellent infrastructural hardware, including an extensive variety of venues and accommodation options, as well as software, with a skilled and talented tourism workforce capable of organising successful and engaging meetings and events.

Singapore was ranked second in The Economist Safe Cities Index 2017. According to a survey released in early 2016 by global human resources consulting firm Mercer, Singapore is the safest city in Asia, and the eighth safest in the world.

Business as Usual in the Face of Uncertainty 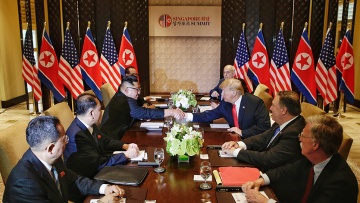 There was much uncertainty, though, surrounding the event, which was initially announced on 10 May, cancelled two weeks later on 24 May, before being reinstated a week later. Organisers eventually had a mere 11 days to make all the necessary arrangements for this global event of the year.

“We’re used to doing things quickly without sacrificing quality – that’s the Singapore way,” said Mrs. Janet Tan-Collis, president of the Singapore Association of Convention and Exhibition Organiser and Suppliers (SACEOS). “In our industry, short turnaround times and last-minute requests are common. What’s important is our can-do spirit, our ability to take on these challenges and turn them into something phenomenal, and I think that’s what we’ve managed to do with the Summit.”

Given its historic significance, every aspect of the Summit was meticulously looked into by various tourism industry stakeholders. In particular, hotel staff from The St. Regis Singapore, The Capella Resort, Singapore and the Shangri-La Hotel, Singapore, had to anticipate detailed and specific requests, liaise with both delegations to meet their needs while accommodating shifting schedules and itineraries in order to deliver a seamless experience and peace of mind for their guests.

These hotels are no strangers to hosting high-security events. For example, Shangri-La Hotel, Singapore, was the official venue for the landmark meeting between Chinese President Xi Jinping and the then Taiwanese President Ma Ying-jeou in 2015. For 17 consecutive years, the hotel is also the host of the Shangri-La Dialogue, an event attended by defence ministers and delegates from across the globe.

For the Summit, the hotel assembled an international task force comprising 20 additional colleagues from other Shangri-La Hotels in the region and senior management from the corporate office. The special task force brought together expertise in fields such as security, engineering, housekeeping, food and beverage, and communications, and was personally reviewed and supported by the group’s President and Chief Operating Officer.

“It is indeed our honour to have been selected to be part of this landmark event. I am tremendously proud to stand with the team who have gone the extra mile to ensure the delegates and all other guests had a seamless Shangri-La experience. It is with this spirit of teamwork and sincere hospitality, that Shangri-La Hotel, Singapore is capable of hosting delegations of such significance,” said Mr Bipan Kapur, the hotel’s General Manager.

A Strong Track Record of Safety and Security

Ensuring the safety of all parties involved in the Summit was another big priority. Ranked first in the world for Order and Security (World Justice Project (WJP) Rule of Law Index 2017-2018), Singapore has an established track record of hosting regional security summits and high-profile bilateral meetings. 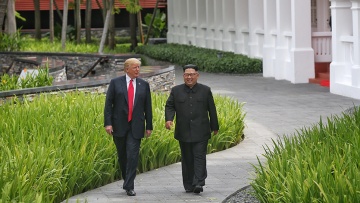 Extensive planning and training allowed the event to proceed safely and smoothly with no major hiccups. Advance teams from the United States and North Korea met in Singapore a week ahead of the Summit to finalise security, protocol and logistical details. Special event areas were designated at key locations, including the Tanglin area and Sentosa Island, where stricter security checks would be conducted on people and vehicles.

The Singapore Armed Forces also deployed a vast and comprehensive net of security task forces around Singapore, which cut across aerial, maritime, island defence and special operations to ensure absolute safety for all participants in the Summit.

Another unique aspect of the Summit was the hosting of over 2,500 media, the largest-ever media contingent to descend on the Republic. To accommodate such a large and diverse group, the F1 Pit Building, used for the annual FORMULA 1 SINGAPORE GRAND PRIX, was transformed into a three-storey International Media Centre that spanned 23,000 square feet.

With only a limited number of media allowed to attend the Summit in person, some reporters had to rely on live updates of the proceedings. The International Media Centre, which was open around the clock, was equipped with lightning-fast broadband connections and a broadcast centre to ensure that the media received real-time first-hand information of the Summit, which they could then adapt and beam across the world.

This has affirmed Singapore’s position as the top “technology-ready” country in the Asia-Pacific by the World Economic Forum in its Global Information Technology Report 2016.

Warm hospitality was also a critical aspect of this mega media hosting. A diverse and complete food menu comprising 45 dishes across 15 cuisines was prepared for visiting journalists by airport ground handler and food firm Singapore Airport Terminal Services Limited (SATS). The menu included local delicacies that Singapore is famous for, such as laksa (noodles in spicy soup with coconut milk) and chicken rice. All in all, more than 7,000 meals were prepared over the three-and-a-half days.

“The menu was designed to have a good balance between popular local fare – such as Hainanese Chicken Rice and Laksa – and dishes with an international appeal, to showcase Singapore's diverse multi-racial culture,” said Rick Stephen, Director of Kitchens, SATS Ltd. “Despite pressure from the short turnaround, we were able to rise to the challenge because of our culinary and technological expertise, as well as the capabilities of our two Inflight Catering Centres that can produce up to 110,000 meals daily.”

Other homegrown food and beverage companies also came under the spotlight. Old Chang Kee served their signature curry puffs from a food truck, while Ya Kun Kaya Toast dished out local coffee and tea alongside local favourites, such as kaya toast with soft-boiled eggs. Other homegrown brands such as Udders, Sogurt and Sugalight supplied ice cream.

Making the Most of the Singapore Experience

Despite hectic schedules, Singapore’s compact nature and ease of getting around meant that all visitors for the Summit were able to spend time exploring the city’s wealth of leisure experiences, including attractions such as Gardens by the Bay, the Merlion Park, and the SkyPark at Marina Bay Sands®.

Mr Nicholas Fang, director of security and global affairs at the Singapore Institute of International Affairs, believes that the Summit has boosted Singapore's branding. This view was echoed by media monitoring firm Isentia, which estimated that 69 per cent of the buzz generated from the Summit was positive.

Social chatter analysed by social media and intelligence company Digimind revealed that the location of the Summit (Singapore and Sentosa) captured about 36 per cent share of voice globally, while media intelligence analyst Meltwater concluded that Singapore may have gained more than $760 million (US$570 million) worth of tourism, retail and media exposure.

While the curtains may have fallen on the historic Summit, it is clear that Singapore’s star continues to rise as a leading business events destination that empowers visitors and enables new possibilities.