2021 marked the debut of the highly anticipated Asian edition of gamescom – one of Europe’s leading trade fairs for video games. Based in Singapore, gamescom asia is a platform for both Southeast Asian game developers to explore global partnerships, as well as for international publishers looking to connect with Asia’s gaming industry.

Held from 14 to 17 October 2021 at the Suntec Convention Centre, the hybrid event attracted more than 2,200 physical and virtual attendees from 60 countries. The event, which was organised by Koelnmesse Singapore and supported by game – the association of the German games industry, consisted of several key segments. These included the industry conference and virtual Trade Zone (14-15 Oct), both of which were targeted at B2B audiences, as well as a B2C-oriented fully online Entertainment Zone (15-17 Oct).

Among the many exciting events on offer over the four days were panels, keynotes and technical dialogues by industry experts from renowned studios such as Riot Games, Bandai Namco and Neon Doctrine, as well as hands-on test drives of the latest game and product demos. Avid gamers tuning in virtually were not left out as they were kept entertained by live hosts, sneak peeks, game trailers, online challenges and interviews.

Further adding to the bustle of gamescom asia were two partner events: Gaming Matters – a trade conference that explores the synergies between the gaming industry and the music, sports and marketing industries, and Global Top Round (GTR) Conference – which supports early-stage gaming studios around the world. The latter event was attended by investors, publishers and partners, as well as the Top 20 finalists of GTR’s annual acceleration programme.

Blending the Physical and Digital Sphere 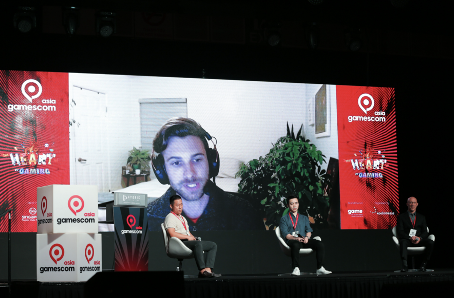 Reflecting the event’s hybrid nature, gamescom asia brought together both physical and online speakers and attendees in one seamless manner. Employing the use of innovative technology, live-stage and live-stream talks were delivered by both physical speakers, as well as virtual speakers from across the globe.

To ensure a high-quality experience for digital attendees, as well as facilitate their interactions with those physically present, digital platforms such as the virtual Trade Zone were set up to enable business discussions between developers, publishers, indie creators, esports organisers, venture capitalists, and many more.

Describing his experience of addressing a mix of physical and virtual attendees, Konrad Czernik, Art Director at Flying Wild Hog, and a panellist at gamescom asia, shared that an advantage of having worked remotely from home over the past two years was that he had gotten more used to working live on camera. “So I knew what to expect and I [could] believe that there [was] someone else behind the screen. But it was nice to see eyes and not talk to a blank camera.”

Konrad added that good organisation and nifty touches such as knowing the number of online viewers tuning in at each point in time also added to the overall experience, and helped him to speak more comfortably.

No Compromise to Safety 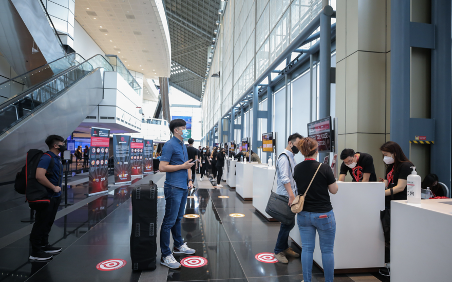 A key component of gamescom asia’s success was due to the attention taken towards designing and implementing safety protocols. A clear plan, executed by friendly and well-trained event personnel, ensured that all participants and attendees felt comfortable and confident to attend the event.

Jasper Donat, CEO of Branded, which is the organiser behind Gaming Matters, shared that his company worked closely with the Singapore government and Singapore Tourism Board to make sure that while all safety precautions would be taken, it would not be done in a way that would impede on the attendees ability to enjoy the event.

“And once they were in, they were fairly free to roam around. It was like a little bubble [where] they could communicate, talk and meet. It was great to see people meeting again, and it was wonderful to see the look on their faces when they saw people… [the way] it used to be,” said Jasper.

Kaveri Khullar, Marketing Director at Mastercard Southeast Asia, and a panellist at Gaming Matters, added that clear communication leading up to the event was also instrumental in providing attendees with a sense of assurance. “We were told exactly what we needed to do, how much earlier in advance we needed to be here, and how social distancing measures were going to be observed. I think all that creates a sense of safety.” 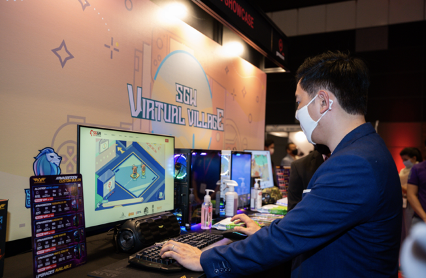 The success of gamescom asia demonstrates Singapore’s reputation as a hub for business and events, even amidst the changing face of travel and events. This was achieved with an innovative mindset that saw technology not only as a way to overcome challenges, but to bring the industry forward.

As a hybrid event, gamescom asia has not only connected participants which have been isolated due to the pandemic, but has also managed to include young gamers who may not yet have the means for international travel. It has also lengthened the lifespan of the event by keeping its digital platform open, giving attendees and people who missed the event an extended opportunity to access content, watch videos and connect with like-minded professionals.

gamescom asia certainly represents a landmark for Singapore’s gaming industry as well as sets the tone for what can be achieved for all future events in Singapore.