You’re here with a group of friends, ready to take on the city. Beyond indulging in gastronomic delights and getting your fill of local culture, team up with your buddies to conquer the go-kart racetrack, your Halloween fears and even one another in a not-so-friendly round of paintball. Here are seven activities that are ideal for large groups—because as they say, there’s strength in numbers. 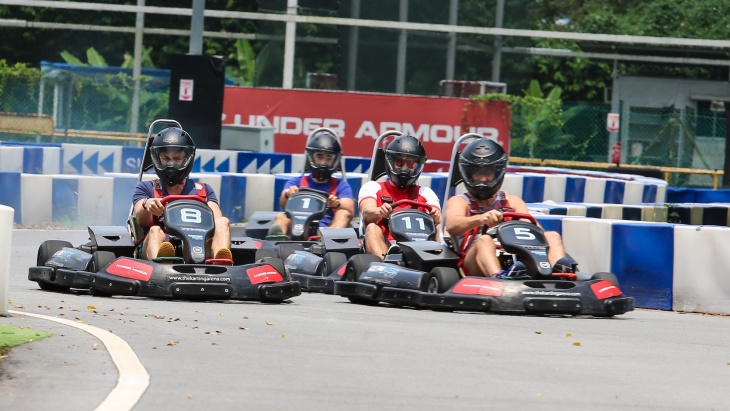 Engage in friendly, or not-so-friendly, fire

Be part of a crack team of soldiers as you battle it out in teams across a sprawling war zone—thankfully, the bullets that fire from your weapons only splatter paint, not blood. Red Dynasty Paintball Park has two branches in Singapore, each with different zones. The grounds at Yishun mimic a besieged city, with life-sized tanks, snipers’ watch towers, civilian houses and even amenities. Your mission: to either protect or pillage the city, depending on the side you’re on.

If you prefer a more traditional player-versus-player format, check out the Turf City outlet—it’s the largest paintball park in Singapore, and has four fields on strewn with obstacles such as sandbags and barrels.

For those who fancy themselves a marksman, Turf City’s shooting gallery will have you competing against one another to hit the most targets. You’ll need to book a package in advance.

Your squad will need to put your brains together if you plan on winning this game, where the objective is to escape a locked room before your time runs out.

Sounds simple, but in reality, not quite. Teamwork, communication and the sharp wit of Sherlock Holmes are key to solving the puzzles that lead to the exit door before your time runs out.

Trapped Escape Room offers ‘first-person reality’ Escape Rooms, which put you in the shoes of the game’s characters. There are several rooms to conquer, ranging from a haunted army bunk to the mind-bending scenario of a mental ward. You can even relive the scenarios of Hollywood blockbuster like The Purge and The Hunger Games. It’s best to make an appointment for your preferred room well in advance.

You won’t have to wait for high noon to practice being quick on the draw.

For the unacquainted, Nerf guns fire harmless foam projectiles, making this a great activity for young adults and families with children. The space also boasts both retail and F&B venues for visitors looking to take home a memento or grab a snack after all the action.

Ticket sales begin daily from 10am, with the last ticket purchase at 7:30pm. Visitors are recommended to book tickets in advance.

Step into the shoes of a race car driver while you burn rubber on the tarmac at The Karting Arena, which houses the city’s first electric go-kart track.

Pick the Grand Prix group racing package if you’re in a group of eight. It’s modelled after the actual sport, so you can live out your Lewis Hamilton fantasies as you race against your friends in three rounds: warm-up, qualifying and the race itself.

The karts can reach speeds of up to 50km/h, but if you prefer to keep your lunch down, opt for the fun karting sessions—they’re non-competitive, and even kids aged nine and above can put the pedal to the metal. While The Karting Arena allows walk-ins, the Grand Prix session requires an advance booking.

Scare your pants off

At the Halloween Horror Nights™, ghouls and ghosts reign supreme at Universal Studios Singapore™. Nowhere else does the mantra ‘safety in numbers’ ring truer—haunted houses, roving monsters and live stage performances make this annual screamfest a treat (or trick) for pals looking for after-dark activities outside of the bars. Even the young ones can get in on the Halloween fun, although the theme park advises that those under 13 might be overwhelmed by all the spooks and scares.

Perhaps your idea of fun is careening downhill while you’re safely ensconced within a giant, transparent rubber orb. ZOVB Singapore offers that hair-raising ride, but try out ‘Bubble Soccer’ if you have a group of eight or more. It’s futsal with one big difference: You’ll have to strap a rubber ball over your head and torso while you play.

The padded balls mean you can bulldoze your way through your opponents, sending them flying through the air and bouncing safely back down. While ZOVB Singapore doesn’t have a brick-and-mortar outlet, the folks there can arrange to hold the games in Kovan Sports Centre, The Cage @ Kallang or Golazo Futsal—so you’ll need to book your slot in advance.

If you’ve always wanted to challenge your friend to an old-fashioned knife-on-knife duel, here’s your chance. Ninja Tag Singapore lets you be the stealthy warrior for a day, as you strike and slice your opponents with foam daggers.

Each ninja will have to don a body plate that’s equipped with activation pads that can sense when you’ve been hit. And while you can go all-out and use the experience as an excuse to let off some pent-up steam, there are several game formats that require teamwork, strategy and a whole lot of cunning. You’ll need to reserve a slot in advance.

Biggest sporting events of 2020 in Singapore

Travel different: Behind the scenes tours

A 1-day guide for thrill seekers