Whether you’re a history buff, music fan or nature lover, this historic landmark on a hill is full of surprises.

Entrance of the fort gate at Fort Canning Park 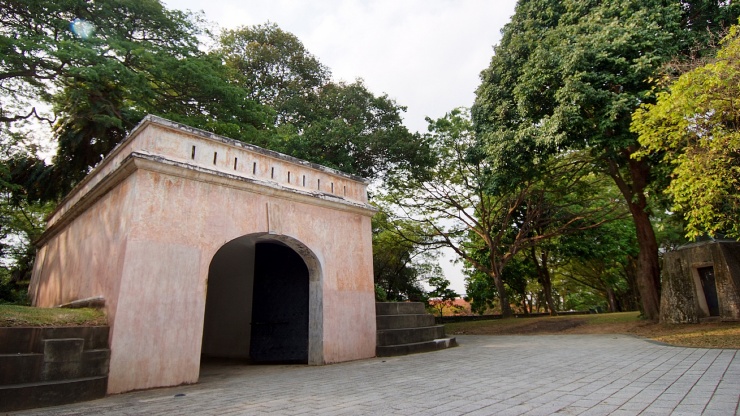 More than just a green space, Fort Canning Park is a gateway to fascinating historical insights and relics from days of yore.

Photo by National Parks Board

Imagine a place in Singapore where Malay royalty once ruled in medieval times, where the British decided to surrender to the invading Japanese during World War II (WWII), and more recently, some of the world’s biggest music acts played to rapt audiences.

This unlikely combination of events has taken place at the hilltop of Fort Canning Park, one of the country’s historical landmarks. Situated in central Singapore, the hill is accessible from the famous shopping belt of Orchard Road, while the National Museum of Singapore sits just behind it.

The park was originally known as Bukit Larangan, or 'Forbidden Hill' in Malay. Today, the 18-hectare space is chock full of attractions—from ancient artefacts for history buffs to outdoor lawns for concerts, and of course, greenery for nature lovers. The charming boutique Hotel Fort Canning, also lies here.

Some highlights include the Maritime Corner @ Fort Canning which tells the story of Singapore's evolution from an entrepot trading post to an international maritime centre, and the Fort Gate, the remnants of a fortress built that was built here in the 19th century. There's also the Spice Garden, the ASEAN Sculpture Garden and Battle Box, a former underground military complex that was used in WWII.

Fort Canning Green—a verdant space surrounded by 18th century gateways and gazebos—is a popular venue for stage performances and classical music concerts alike. Located in the heart of Fort Canning, the lawn’s gentle slopes makes it the perfect natural auditorium for beloved events like Shakespeare in the Park and Ballet Under The Stars.