Singapore is home to myriad races and cultures, each with their own traditions, customs and practices. Festivals happen on a near-monthly basis, making our city a great place to expand one’s cultural horizons and gain insight into diverse beliefs. 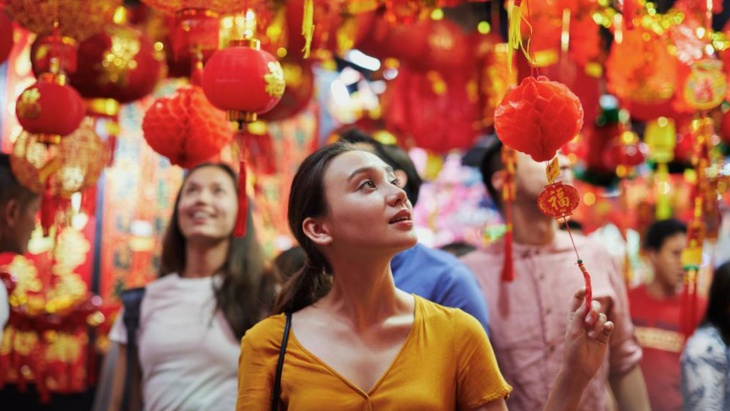 One of the country’s major holidays, Chinese New Year marks the first day of the first month of the Chinese lunar calendar. The dates of Chinese New Year differ every year as they follow the lunar cycle, but generally fall between January and February. Chinese New Year practices include gathering family members for a reunion dinner and giving away ang bao (red packets containing money).

In honour of Chinese New Year, there’s the annual River Hongbao, a vibrant festival held at NS Square, the Marina Bay floating platform, that features enormous lanterns depicting the animals of the Chinese zodiac, along with a smorgasbord of activities like amusement rides and live performances.

There’s also the Chingay Parade, a grand display of the country’s multicultural heritage with visually stunning highlights like majestic floats and stilt walkers.

In January or February, there’s also the Hindu festival, Thaipusam. During this period, devotees gather to seek blessings and fulfil their vows in this amazing spectacle, which starts from Sri Srinivasa Perumal Temple on Serangoon Road and ends at Layan Sithi Vinayagar Temple on Keong Saik Road.

During this two-day festival, some of the devotees pierce their cheeks with metal prongs and carry decorated altars (known as "kavadi"), tethered to their bodies with hooks in a feat of religious devotion.

Held on the fifth day of the fifth month of the traditional Chinese lunar calendar, The Dragon Boat Festival dates back centuries, and is celebrated in the modern day with exciting dragonboat races and delicious rice dumplings.

To watch high-octane races, head to places like Bedok Reservoir, Kallang River and the Marina Bay area. For rice dumplings, Kim Choo Kueh Chang is a top pick amongst locals for this savoury treat.

Muslims observe a holy month known as Ramadan (held prior to Hari Raya Aidilfitri). During this period, Muslims in Singapore gather at the end of the day to break their fast at sundown. During this month, visit areas like Kampong Glam and Geylang Serai for night markets that sell clothes and—best of all—special sweets and savouries.

Occurring every September is the Chinese Mid-Autumn Festival, which traditionally marks the end of the Autumn harvest. When night falls, families gather in places like Chinatown and Chinese Garden to feast on mooncakes, a traditional pastry which comes in a variety of flavours. During this festival, children carry and parade their lanterns with their families and friends.

Around October and November, the Festival of Lights—commonly known as Deepavali—is celebrated by Hindus. This colourful extravaganza is best experienced in Little India, where the streets are lined with beautiful lights. There are tonnes of bazaars too, so get ready to shop, try authentic Indian fare and take amazing photos of the street light-ups.

With so many festivals to be part of and celebrations to witness, there’s always something to keep you intrigued.