Did You Know: Action Seekers

Notice: The 2021 FORMULA 1 SINGAPORE AIRLINES SINGAPORE GRAND PRIX has been cancelled due to the COVID-19 pandemic.

For every idyllic park and beachside retreat, there’s an adrenaline-pumping activity or high-octane event that will thrill even the most daring action seeker. Here are eight facts about Singapore’s wilder side. The ‘world’s fastest flyer’ is Singaporean 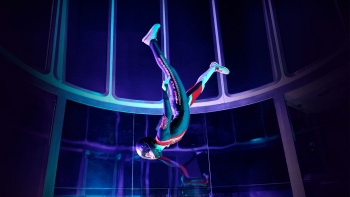 Kyra Poh is not old enough to drive, but she can fly. The teenager was crowned the ‘world’s fastest flyer’ at the Wind Games 2017, an achievement that comes after years of practice at iFly Singapore. Follow in her footsteps at the indoor skydiving facility, which simulates free-falling through the air from 12,000 feet up—all without having to step foot on a plane. And as Kyra proves, even kids as young as seven can experience the adrenaline rush of plummeting from such great heights. 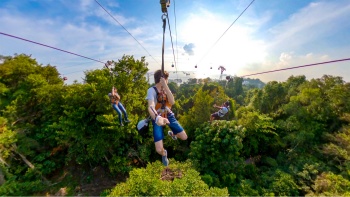 Once you strap into MegaZip, on the canopy of Sentosa’s Imbiah Hill, you’ll be plunging down the hill at speeds of 60km/h towards the white sands of Siloso Beach. That’s a 450-metre-long trip from 75 metres above ground, making the zip-line Southeast Asia’s steepest and longest. MegaZip is part of Mega Adventure Park – Singapore, which will have you channelling your inner Spider-Man as you attempt the park’s hair-raising rides.

We have the world’s only ‘dual bungee swings’ 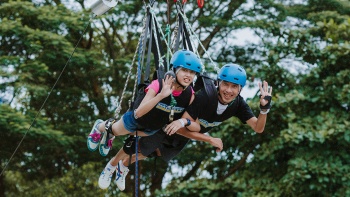 Gather your mates for a spot of friendly competition on AJ Hackett’s Giant Swings, the only one of its kind in the world. Two sets of swings—each accommodating up to three daredevils—simultaneously careen down from 40 metres in the air at speeds of over 100km/h, and back up again, so you’ll be able to challenge your buddies to a race that isn’t for the faint of heart. 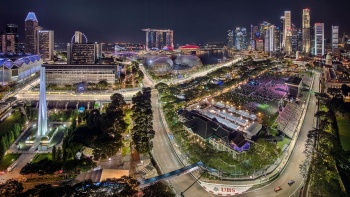 Immerse in the thrilling atmosphere of the world’s first-ever FORMULA 1 night race during the Grand Prix Season Singapore. Once the likes of Lewis Hamilton buckle up under the glittering office towers of our Central Business District, they’ll have to negotiate one of the toughest tracks on the F1 circuit. Hairpin turns, an ‘S’-shaped series of treacherous swerves and many overtaking opportunities make the track a thrill-seeker’s dream.

Our best swimmer is faster than Michael Phelps

Joseph Schooling stunned the world when he beat the all-time greatest Olympian at the 100-metre butterfly—Phelps’ pet event—during the 2016 Summer Olympics. Since then, Schooling has been inducted into our Sports Hall of Fame, in the Singapore Sports Museum. Be inspired by the courageous stories of our sportsmen and women, many of whom, like Schooling, triumphed through their faith in their passions.

Legendary athletes strut their stuff on our turf 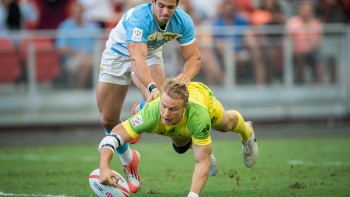 Legendary athletes strut their stuff on our turf In Singapore, you don’t have to be content with watching legendary sportspeople on a television screen. From tennis veteran Venus Williams to South Korean golfer Inbee Park to football greats such as Steve McManaman, we have played host to the world’s finest athletes. You’ll be able to witness their skills in friendly and competitive tournaments that are held over the year, like the HSBC Women’s Champions, HSBC World Rugby Sevens Series and Football Masters games.

One of Asia’s best skaters is a local 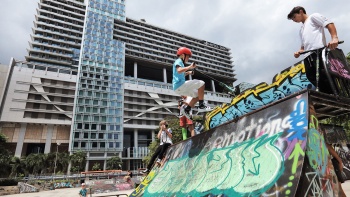 Having placed in the uppermost echelons of international extreme sports competitions, Farris Rahman is easily one of Asia’s best skateboarders—he’s even one of only two local athletes to be endorsed by Red Bull. Even though skating is a relatively small sport in the city, with just an estimated 4,000 skaters, it’s one filled with the most passionate people. Just head to the Somerset Skate Park, Xtreme SkatePark or Bishan Harmony Park, and you’ll see that in action for yourself. If you’re lucky, Farris himself might be among those practising his flips and grinds there. 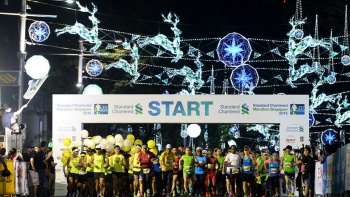 It isn’t the lush parks and safe streets that make Singapore a haven for the avid marathoner—it’s the races. On any given month, you’ll find serious running competitions, such as the Standard Chartered Singapore Marathon and the Sundown Marathon, to put your endurance to the test. But if your stamina isn’t what it used to be (or if you’re travelling with kids), then sign up for a ‘fun run’ instead. These, like The Color Run and The Music Run, are themed events that pack entertainment, games and performances into a short course of five or ten kilometres.

Why GPSS is the best time to visit Singapore