Inspired by a kaleidoscope of religions, cultures, and communities, Singapore’s architecture is a result of diverse influences. Churches, mosques, synagogues and temples built by Singapore’s early settlers enliven our cityscape with a myriad of colours and forms. Visit these iconic places of worship to appreciate various architecture styles like vernacular, revivalist and contemporary, while gaining insights into Singapore’s history and cultures. 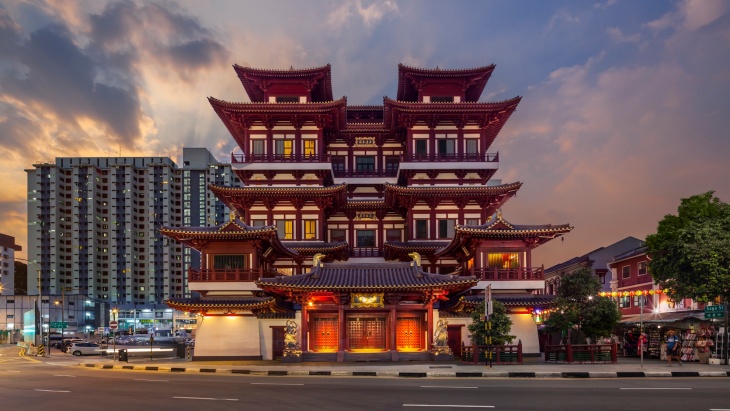 Trace Singapore’s roots by visiting these temples, whose architectures are directly influenced from the Indian or Chinese vernaculars. 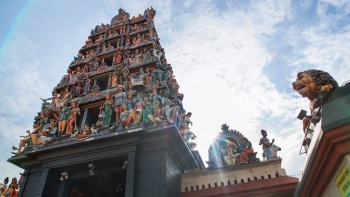 The ornate six-tiered gopuram (grand tower entrance) on this iconic temple’s façade, is built in the Dravidian style of architecture, and decorated with Hindu deities and mythological figures. Behind the main prayer hall, there are several smaller rooms with shrines honouring various deities. The oldest Hindu temple in Singapore, Sri Mariamman Temple serves as a focal point for the Hindu community, and is dedicated to Goddess Mariamman, known for her powers in curing epidemic illnesses.

While its architecture is similar to Sri Mariamman’s (Dravidian), Sree Ramar has its own unique qualities; in addition to statues of Hindu deities such as Rama, the temple is also home to statues of Lord Buddha and Guan Yin (Goddess of Mercy), reflecting Singapore’s multi-religious makeup. 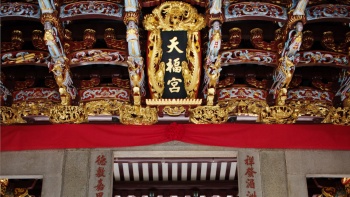 Thian Hock Keng Temple (or “Temple of Heavenly Happiness”), the oldest Chinese temple in Singapore, is dedicated to Mazu, the Goddess of the Sea. Early Chinese immigrants would come here to give thanks for their safe passage across the South China Sea. Marvel at the temple’s unique Fujian architecture style, which is distinguished by detailed sculptures of dragons and deities, as well as the colourful broken porcelain on the roof ridges. Fun fact: This architectural masterpiece was constructed without the use of a single nail, and is now a gazetted national monument. 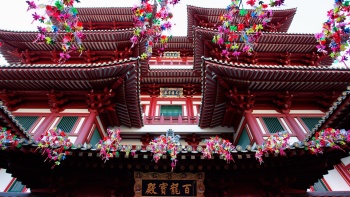 Completed in 2007, this Buddhist temple sports a charming yesteryear aesthetic. The architecture, which strictly follows northern Chinese temple styles complete with Tang Dynasty details, was a result of numerous iterations. The abbot of this temple was extremely rigorous while working on the temple’s architecture: He ensured that it abided by tradition in order to reflect Singapore’s Chinese heritage and respect its neighbourhood of Chinatown.

A prominent architecture style in Singapore, revivalism can be admired at these places of worship while you enjoy both their cultural and historical significances. 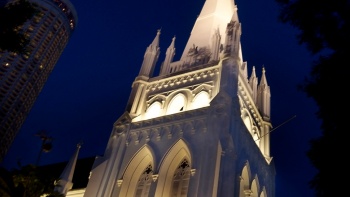 The oldest Anglican church in Singapore was built on land donated by an Arab settler, and is said to be inspired by the design of a 13th-century English church. Three primary components of this church that establish its relation to the Church of England: the Canterbury Stone, the Coventry Cross and the Coronation Carpet.

Designed in the Palladian style, and newer of the two synagogues in Singapore, the Chesed-El Synagogue is a Renaissance-era revival of ancient Greek and Roman architectural features. This style is characterised by arches, Corinthian columns and a covered porch where the original intent was to allow horse carriages to pass through. One of the local Jewish community’s most prominent members is the late David Marshall, who was instrumental in fighting for Singapore’s independence. 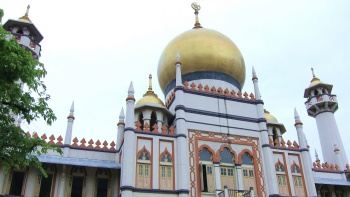 The current building of “Masjid Sultan” was completed in 1932, and bears all the hallmarks of the Indo-Saracenic style, which is a British Indian style that combines traditional Persian, Moorish and Turkish influences. Look closely and you’ll spot glass bottles decorating the bottoms of its domes—this design solution enabled all members of the Muslim community to contribute to the construction of this mosque.

Witness how Singapore blends ancient religions seamlessly into our modern cityscape. These historic places of worship have won acclaim and awards for their striking contemporary designs.

Opened in 2004, the mosque looks nothing like one, and that was intentional. Forum Architects deliberately avoided literal domes, arches and minarets in order to, according to the mosque, search for a contemporary Singaporean identity, unlike other local mosques that are based on Middle Eastern models. In doing so, the architecture focuses on ‘calmness’, ‘spirituality’ and ‘a sense of oneness’, with natural light as a prominent medium. The building won the Chicago Athenaeum International Architecture Award in 2008.

Church of the Blessed Sacraments (Postmodern)

Completed in 1965 by Van Sitteren and Partners, this Catholic church is well known among locals for its striking blue slate roof: It resembles origami folds in the shape of a tent, which symbolises the ‘tent of meeting’ in the Old Testament. Its other noteworthy architectural feature is the interior of the church. The main sanctuary is built in a cruciform shape, and the four points at which the hall meets the roof are panelled with glass. This technique allows natural light to dramatically illuminate the interiors.