The best time to visit Singapore

It’s summer all year round in Singapore, with average temperatures of 26 to 27°C throughout the year. Visitors won’t have to fret too much about dressing for the weather in sunny Singapore—keep it light, comfortable and cool, and don’t forget your sunnies.

Singapore’s the perfect holiday destination for a shopping getaway, family trip, or even an island escapade. Our island’s multi-ethnic culture is also reflected in an array of festivals all through the year, so you can immerse yourself in the local traditions no matter when you visit. 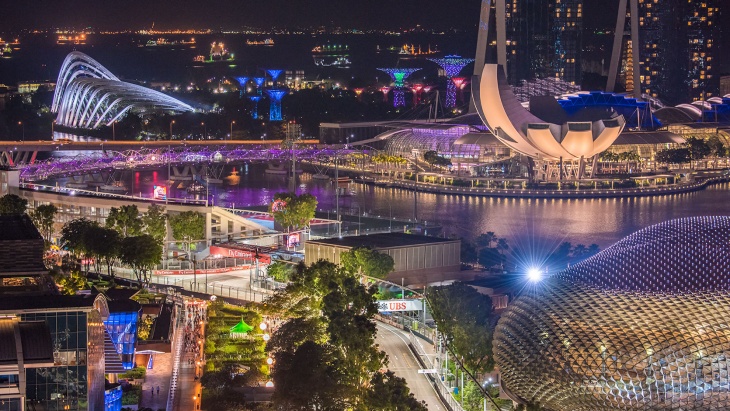 Start with a bang (January to March)

Start the year off with a bang when you visit Singapore in the months of January-March, a period that boasts activities from ethnic celebrations to weekend music festivals.

The most celebrated festival of the Chinese calendar, Chinese New Year, usually takes place in January or February. Enjoy seasonal markets, lion dances and festive feasting during this period. You can also check out the annual Chinese New Year Chingay Parade, where performers take to the streets to honour Chinese deities like Guan Yin, the Goddess of Mercy.

Then, immerse yourself in the most colourful Hindu festival of the year, Holi (also known as the “festival of colours” or the “festival of sharing love”). Join the revellers as they shower themselves in coloured powder and spread joy on the streets with music and dance.

Shop and savour this summer (April to July)

The middle of the year is when Singapore is the driest, so make sure you stay hydrated while you hit the streets for shopping, food festivals, and more festive celebrations.

A religious holiday for Muslims in Singapore, Hari Raya Aidilfitri (also known as the “Eid” or “Hari Raya Puasa”) marks the end of Ramadan and is one of Singapore’s major cultural festivals. Muslim families don vibrantly coloured traditional clothing and visit their family and friends to enjoy home-cooked feasts together.

When in Singapore, do as the locals do—shop until you drop. Don’t miss the biggest sale of the year, the Great Singapore Sale (GSS), which happens every June. The GSS sees the entire retail scene in Singapore reducing prices, so make your way to Singapore’s many iconic shopping streets to nab yourself a deal.

Another favourite Singaporean hobby is indulging in food. Join the festivities of Singapore’s extraordinary culinary scene at the Singapore Food Festival, where you can sample the diverse flavours that the country has to offer.

Play it cool (August to October)

This part of the year is known for cooler weather with occasional sprinkles, so bring an umbrella with you when you’re out and about.

On the 9th of August, witness the ‘Lion City’ get into full patriotic gear at the annual National Day Parade, where Singapore celebrates its independence. Expect to see live performances and a spectacular firework display to end the night.

This season is also when the Mid-Autumn Festival takes place. Taste delicious mooncakes and light a lantern or two during this traditional Chinese holiday, held on the 15th day of the eighth month of the Chinese calendar.

In September, support your favourite FORMULA ONE racer at the Grand Prix Season Singapore. This adrenaline-pumping weekend will also see some popular international music acts hitting our shores for the F1® track-side performances.

While the end of the year may see some rain clouds on the horizon, the city is far from dreary. Get festive in the months of November to December with Deepavali, Christmas, and New Year celebrations that will light up the city.

Celebrate Deepavali, the Hindu festival of lights, which illuminates the city with the glow of oil lamps. There are plenty of bazaars set up in Little India during the festival, where you can savour Indian delicacies and peruse racks of colourful traditional outfits.

Christmas Wonderland at Gardens by the Bay is a yuletide event for the whole family. Be enthralled by stunning Luminarie light sculptures and enjoy a quintessential Christmas experience at the Christmas market. Orchard Road also dresses up for the occasion—the Christmas on A Great Street celebration features light-ups, festive decorations and bazaars along the shopping belt.

For all you partygoers, head down to the Siloso Beach Party, Singapore’s biggest beach countdown party, on New Year’s Eve, and end the year on a high note.

There’s something for every type of traveller no matter the time of year, and the weather conditions are consistent year-round in Singapore—so just look to the many annual happenings when you mark your calendars and plan your trips.

Which Singapore hotel is for you?