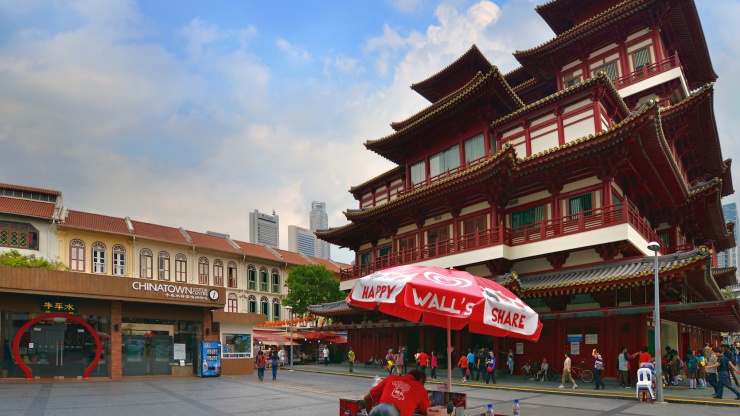 House within the Buddha Tooth Relic Temple’s impressive façade are centuries-old relics and exhibits that tell the story of Buddhist history. Home to both tradition and modernity, the bustling district of Chinatown comes alive at night.

Besides being an ethnic enclave for Singapore’s early Chinese settlers, Chinatown has transformed into the country’s largest heritage precinct—filled with an exciting meld of hip haunts, cultural treasures and architectural gems.

Encompassing Kreta Ayer, Telok Ayer, Tanjong Pagar and Bukit Pasoh, Chinatown’s four sub-districts each possess their own unique charms. While Chinatown’s size might seem daunting for the first-time visitor, this comprehensive guide will ensure you don’t miss out any of its star attractions. 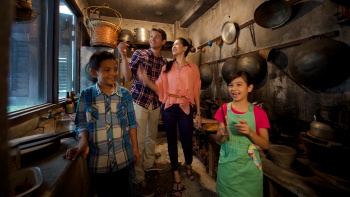 A gateway into Singapore’s yesteryears, the 1 Chinatown Heritage Centre makes the perfect starting point for your voyage of discovery. Learn about the lives of Chinatown’s inhabitants through the establishment’s six galleries of interactive exhibits, which include olfactory displays of opium and spices, immersive streetscapes and homages to its current notable residents.

If you’re looking for a guided tour, you can explore Chinatown’s rich culture with ‘Red Clogs Down The Five Foot Way’. Helmed by the master storytellers from Journeys Pte Ltd, this tour will have you exploring traditional Chinese trades, discovering beautifully-conserved shophouses and learning about the lives of the district’s early denizens.

Note: Chinatown Heritage Centre is closed until April 2021 for renovation and enhancement works. Built almost two centuries ago, 2 Sri Mariamman Temple, Singapore’s oldest Hindu temple, remains a thriving place of worship to this day. Marvel at the majestic, six-tiered gopuram (grand tower), and then head inside to explore further.

The statue of the temple’s patron goddess is only unveiled during special occasions, but you’ll be able to admire the site’s murals and shrines, dedicated to the Hindu deities Durga, Ganesh and Shiva. 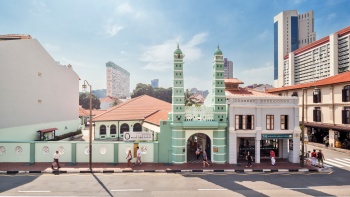 Discover Chinatown’s religious diversity as you make your way down South Bridge Road, and observe the distinctive octagonal minarets of 3 Masjid Jamae.

Also known to locals as Chulia Palli (Chulia Mosque), this age-old religious establishment was established by Tamil Muslims from the Coromandel Coast between 1830 to 1835. Its architecture can be traced back to the 19th century, and fuses elements from both Neoclassical and South Indian tradition. 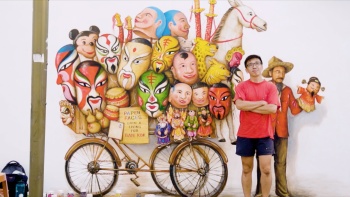 Make a detour down 4 Mohammed Ali Lane, and encounter art unbound from galleries. Painted by Yip Yew Chong—one of Singapore’s many bold street artists—these Instagrammable murals depict nostalgic scenes from our city’s past.

Puppeteers, lion dance costume makers and other nostalgic figures are immortalised on this quiet street, and provide a glimpse into the Lion City’s past. 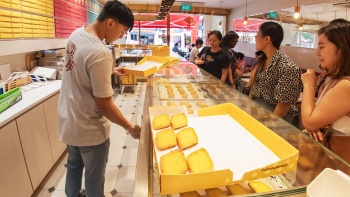 For a taste of tradition, grab a sweet morsel or two for the road as you stroll past 5 Tong Heng. This century-old Cantonese confectionary is famous for its egg tarts, but you should also sample their red bean paste pastries and lao po bing (pastry made with winter melon, almond paste and sesame). 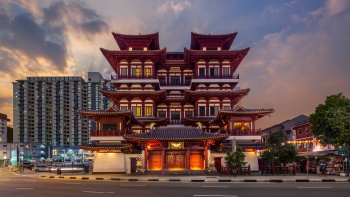 The 6 Buddha Tooth Relic Temple & Museum's distinctive Tang Dynasty-inspired architecture will be easy to spot as you make your way down South Bridge Road. Both a museum and a place of worship, visitors are free to explore the temple’s repository of relics and cultural artefacts.

We recommend taking a quick breather at the temple’s tranquil rooftop garden, with its distinctive pagoda and prayer wheel. 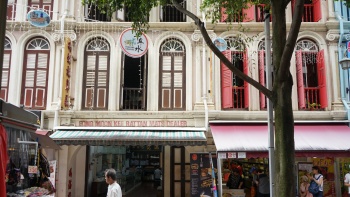 Named for the sago flour factories that dotted the area in the 1840s, 7 Sago Street is now home to traditional Chinese apothecaries, unpretentious eateries and souvenir stalls. For toothsome pastries and delightful mooncakes, be sure to swing by Tai Chong Kok—This old-school bakery has been in operation since 1935. You’ll find plenty of knick-knacks and memorable mementos by browsing the wares of the pushcart vendors along Sago Street and its immediate vicinity. 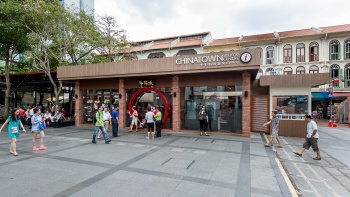 If you’re still feeling disoriented by the district’s hustle and bustle, you can get all the info you need at the 9 Chinatown Visitor Centre. These visitor centres can be found all across Singapore, and offer a range of walking tours, souvenirs and tickets to island-wide attractions. 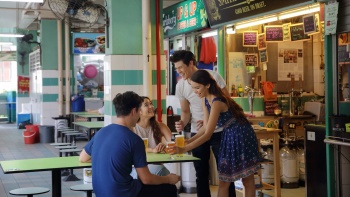 Hungry from all that walking? You can delight your taste-buds with our city’s medley of cuisines at 10 Chinatown Food Street. This open-air stretch of eateries boasts some of Singapore’s most iconic dishes, ranging from satay (grilled meat skewers) to char kway teow (stir-fried rice noodles in dark soya sauce). Alternatively, make a pit stop for lunch at the island’s largest hawker centre. While you won’t find food vendors touting their dishes along Singapore’s busy street these days, their legacy lives on at 11 Chinatown Complex. Make 12 Nam’s Supplies your next destination, and gain insight into the religious customs of Singapore’s Chinese community. The establishment stocks a range of paper effigies, incense oil and other offerings used during religious ceremonies to commemorate and show respect to the dearly departed. One of Singapore’s oldest and most venerated Hokkien temples, 13 Thian Hock Keng Temple's patron deity—Mazu—was said to have watched over the 19th-century Chinese immigrants who made their ways across the seas.

Before the land was reclaimed, it used to stand on the shoreline of Telok Ayer Basin. Venture inside, and marvel at the ingenuity of traditional Chinese carpentry; the space was built without a single nail being used during its construction.

Talk about putting the ‘hospital’ in hospitality—formerly the home of a decades-old medical establishment known as the Chung Hwa Free Clinic, this space has been revitalised by 14 My Awesome Cafe. This trendy eatery serves up all-day breakfast platters, hearty sandwiches and wholesome salads amidst industrial-chic surroundings.

Be sure to grab some merchandise on your way out, and snap an Instagram photo to commemorate your time in Chinatown.

Afterwards, spend the night winding down at any of the watering holes at Keong Saik or Ann Siang, or tuck into some Michelin-starred nosh in the area.