A prayer session at a Hindu temple Little India’s many Hindu temples make the precinct a must-visit for culture vultures.

A Ride through Race Course Rd by Jaxton Su Jingxiang A visual artist collaborates with art students and migrant workers to create this mural that’s an ode to Race Course Road’s past. 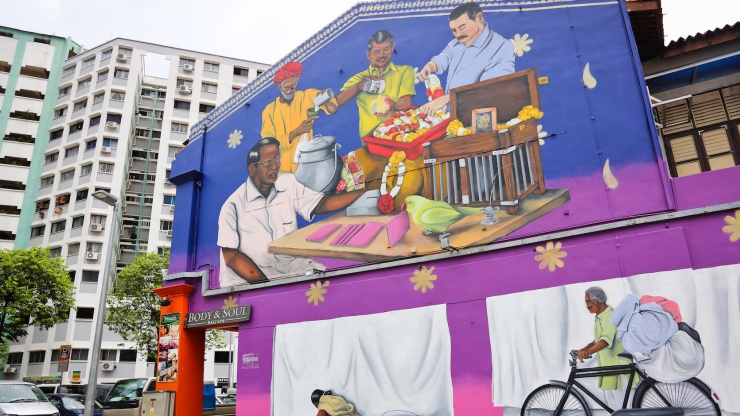 In this mural, a local artist pays homage to the traditional trades that were once prevalent in Little India.

Little India’s bustling streets are a magnet for tourists. From rows of shops exuding the aroma of spices, to fortune-telling tables sprawled along walkways, the precinct has stood as a cultural vanguard of Singapore.

Yet, even within this ethnic enclave, Singapore’s pluralism manifests. Tucked away in its roads, you’ll find numerous landmarks of the city’s many ethnic and religious groups. Stroll along streets and back alleys, and your eyes will be drawn to extravagant murals showcasing Singapore’s colourful past. Embark on a Little India walking trail to explore Singapore’s diverse history, a story that is also splashed across its majestic murals.

The enthralling trail, which includes pit stops at the neighbourhood’s foremost landmarks, should take four hours—sans food and #OOTD breaks. 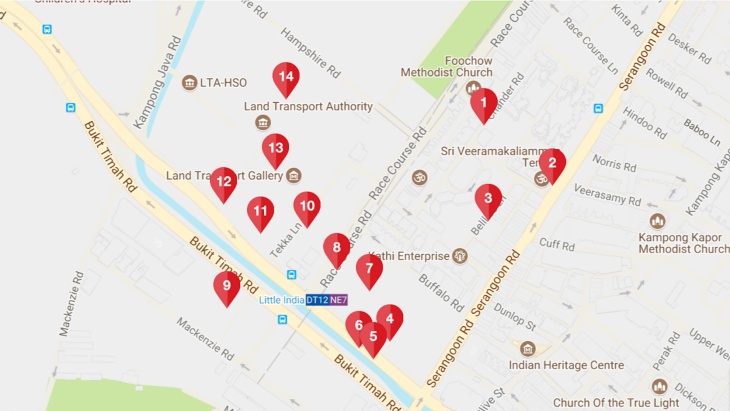 All venues are near the Little India MRT station

Start your trail at the 1 Working Class Hero mural along Hindoo Road, where you’ll come face-to-face with the deified Indian superstar, Rajinikanth. The portrait pays homage to the Indian community, whose lives revolve around this cultural enclave. Revered above any other actor in the cinema world, Rajinikanth has always championed the commoner, having come from a humble background himself.

Across the road is 2 Sri Veerama-
kaliamman Temple—Little India’s most visually stunning temple is dedicated to the ferocious goddess Kali, who can be seen on the temple roof, wearing a garland of skulls. One of Singapore’s oldest places of worship, this Hindu temple houses reliefs and statues that survived the bombings of WWII.

Then, stroll along Kampong Kapor Road and marvel at 3 Kampong Kapor Methodist Church, whose gleaming white walls belie its 70-odd years of history. The stoic white building stands out as a spiritual and architectural beacon among refurbished shophouses. It was one of the first Peranakan (Straits-born people of Chinese and Malay/Indonesian heritage) churches and the fourth Methodist Church in Singapore.

Just around the corner is another work of art that captures the vibrancy of Little India. 4 Alive @ CLIVE is a welcome burst of colour, depicting a traditional dancer on the blue walls of Dunlop Street.

I Am Still Here by Dyn

Continue down 5 Clive Street until you see the mural of a girl in a dupatta (a traditional scarf) sprucing up the wall right behind a performance stage. This scarf, however, was given a camouflage print by its artist, Dyn, who desired to channel both the new and old aspects of the neighbourhood through his artwork, I Am Still Here.

Walk over to the 6 Indian Heritage Centre, the first museum in Southeast Asia to focus on the diverse heritage of the Indian diaspora. This four-storey architectural gem is home to hundreds of historical artefacts, including a 19th-century Chettinad (an Indian community) doorway that’s intricately adorned with 5,000 minute carvings. Come nightfall, the building's translucent façade transforms into a flamboyant tapestry.

At Upper Dickson Road, marvel at 7 Loops of the Precious, that pays homage to the dozens of Indian jewellery shops that line the streets of Little India. In this mural, intricate jewellery designs weave between one another against a bright gold backdrop.

Hop down Serangoon Road towards 9 Tekka Centre, a multi-use complex that has a bustling hawker centre and sprawling “wet market” on its ground level, plus a battalion of rainbow-coloured textile and tailor shops up above.

Tuck into the hawker centre’s slew of street food staples, while the hubbub of conversations raises around you. Listen out for Singapore’s many local languages, such as English, Mandarin, Malay and Tamil, coming together.

For a hearty meal, try Allauddin’s Briyani, a Michelin Bib Gourmand winner that serves the traditional Indian spiced rice dish with meat and vegetables. Top it off with a sweet glass of teh tarik (pulled milk tea) for an authentic local dining experience.

The 10 Traditional Trades of Little India is a mural woven together by local artist Psyfool. It tells a tale of the parrot astrologers, dhobi (washerman), and the many traders and merchants who settled in the area years ago.

11 House of Tan Teng Niah proudly sits at the centre of Little India. Awash in a kaleidoscope of hues, it is one of the last surviving Chinese villas in the neighbourhood. The Instagram-worthy stop was built in 1900, and is evidence of the often overlooked past of when small Chinese-run industries operated alongside the cattle and rattan businesses of Little India.

Many believe that the house was a gift from its namesake towkay (Chinese boss) to his wife. He also owned several sweet-making factories along Serangoon Road.

As you cruise down Kerbau Road, a whimsical painting of cows exploring Little India is sure to catch your eye. 12 Cattleland 2 transforms this once sombre wall into an energetic emblem of national diversity.

Madan Mogra, Jasmine of the City by Nadiah Alsagoff

Follow the jasmine flowers that wind around the corner into an alleyway off 13 Chander Road, and you will uncover a beautiful tribute to the migrant workers of Singapore.

A Ride through Race Course Road by Jaxton Su JingXiang

Trot down Race Course Road for a glimpse of its eponymous artwork, 14 A Ride through Race Course Road. This long mural shows a horse galloping through a market, in a nod to the activities like garland making that once surrounded the former racecourse.