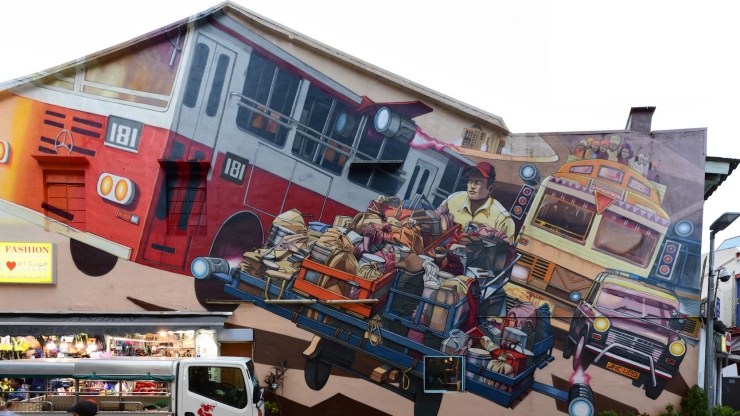 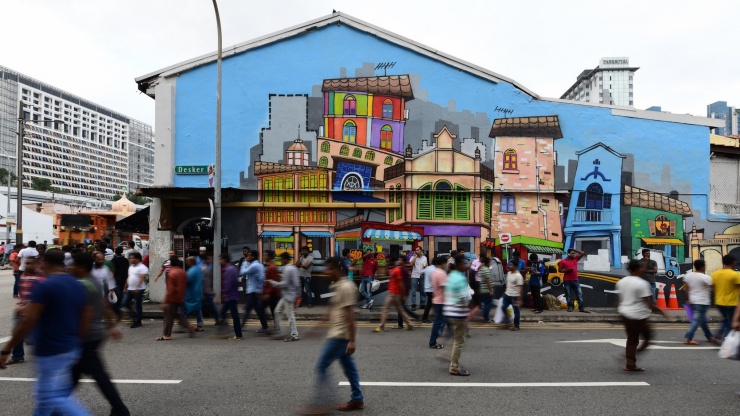 Shah Rizal’s artwork ‘Layers’ emphasises the importance of preserving heritage and recognising the contributions of pioneers in rapidly evolving Singapore. Little India is a cultural, craft and foodie haven. Let your senses be ignited by its vibrant mix of lively shops, ornate architecture and mouth-watering smells.

Venture on this Little India walking trail and journey into Singapore’s diverse heritage. Along cobbled backstreets and some of the city’s landmark roads, you’ll discover magnificent murals celebrating the district’s intricate tales.

Allow half a day to explore the trail, which includes key historical and cultural sights, as well as some tasty eats and treats. 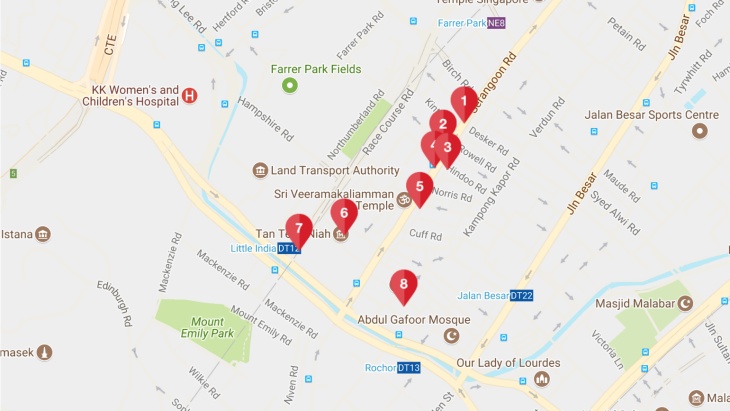 All venues are near Little India MRT Station.

Kick off the trail with an artwork titled 1 Layers on Serangoon Road. Shah Rizzal draws our attention to traditional shophouses and the contribution of early resident brick makers, both invaluable to Little India’s history. “Layers” highlights the need for preserving architecture amid rapid urban redevelopment. Immerse yourself in this visual experience that juxtaposes Singapore’s past against modern surroundings.

Need to satisfy a shopping urge? Cross over to Mustafa Centre, an iconic 24-hour shopping destination where you can buy almost anything, anytime.

This artwork housed in Serangoon Road is named 2 Daily Delivery. This mural pays homage to the precinct’s legendary tiffin (portable meals carried in stacked metal lunchboxes) businesses, a traditional livelihood that has survived until today. Here, a futuristic Tiffin man is portrayed alongside hovering vehicles made from recycled car models, depicting the artist’s vision of a sustainable future that balances tradition and modernity.

A designer who has worked on films like Harry Potter, Iron Man and Star Trek, Colombian-Belgian artist Didier ‘Jaba’ Mathieu is also famous for decorating many parts of Singapore with his colourful murals. You can find some of Jaba’s artworks on the facades of Piedra Negra restaurant and Blu Jaz Café along Haji lane, as well as on an impressive four-story feature wall at the Mediacorp Campus in one-north.

Wander over to the next mural, 3 Festival, found in a back alley of Hindoo Road. You’ll be privy to the oral storytelling of Little India’s residents, transcribed into visuals and symbols. Walk in the shoes of the locals, as you share their stories and celebrate their culture and diversity.

Next up is the thought-provoking 4 Makara on Serangoon Road. Soak in the rich, vivid colours of this mural’s mythical terrestrial creature. Through Makara, Zero lets you discover traditional folklore and stories that have been forgotten over time.

Continue along Serangoon Road to one of Singapore’s oldest religious landmarks, the Sri Veeramakaliamman Temple, where you can admire artefacts that survived the WWII bombings.

A Sailor’s Guide to Little India by A’Shua Imran

Head down a little alley from Veerasamy Road to 5 A Sailor’s Guide to Little India. This mural pays tribute to Little India’s rich and harmonious multicultural heritage. Gain insights to the voyages of our forefathers through beautifully illustrated scenes depicting their different encounters, and share their passions, histories and identities which shaped our city.

Around the corner on Kampong Kapor Road is 6 Mirrors, a pipe installation embellished with tiny traditionally embroidered Indian mirrors. Erected in front of the Kampong Kapor Methodist Church, the artwork celebrates Singapore’s immense diversities of culture, race, religion and language. Through this interactive installation, you can reflect on their individual identity, culture and respective history.

Cruise back to Serangoon Road for 7 Book-a-Meeting, a mural located next to its source of inspiration, the Siyamala Bookstore. Eunice Lim invites you to consider how heritage, traditions and stories are discovered, by taking you through the bookstore’s 30-year history in Little India.

If you’re feeling peckish after all that walking, just across Serangoon Road lies teeming Tekka Centre. Tuck into classic delights like briyani (Indian spiced rice dish with meat or vegetables) and buy fresh produce in the market on the ground floor. Afterward, take your pick from traditional Indian garments, accessories and decorations on the upper level.

At the adjacent block from the Book-a-Meeting mural, is the Indian Heritage Centre, Southeast Asia’s first museum specialising in Indian heritage throughout the region. Marvel at hundreds of historical gems housed in this iconic four-storey building inspired by the Baoli, (an Indian stepwell).

Pop by the Abdul Gafoor Mosque, one of Singapore’s oldest mosques and a national monument. The elaborate sundial crowning its main entrance is one of its kind in the world.

The final mural, 8 Untitled, sits by a back alley of Dickson Road. Inspired by the use of flowers as a form of communication, this anonymous love letter features marigolds as a means to promote positive conversation. Through ‘Untitled’, duo artists Leow Wei Li and Dominic Khoo hope to reignite people’s connection with the language of flowers.

Finish the trail with a hearty meal at Komala Vilas, one of Singapore’s oldest Indian restaurants. Opened in 1947, its founder, Mr. Murugiah Rajoo, came to Singapore with nothing more than a suitcase. Be sure to try the delicious cone dosai (a crepe-like pancake made from rice flour and lentils, shaped into a giant cone and accompanied by various aromatic dips and chutneys) and their signature spicy masala (a pasty marinade of mixed Indian spices) tea, served in a traditional tin cup.

Note: The 2018 walking trail showcases seven new murals and one new installation. Keen for more? Stay in the same hood and check out Artwalk Little India 2017 for a leisurely day exploring art, culture and history in Little India.