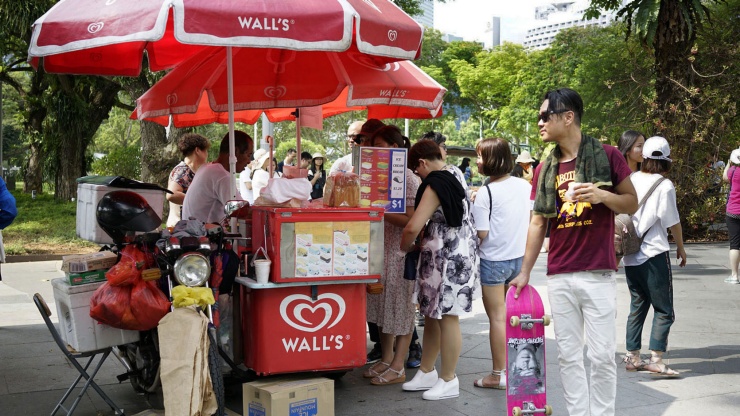 A pioneer of Singapore’s sneaker design scene, Mark Ong is responsible for bringing local designs to the global stage. His label, SBTG, has worked with international celebrities like Kobe Bryant. The view by the ArtScience MuseumTM, deemed “one of the world’s most beautiful places to skate right now” by local shoe designer, Mark Ong.

To understand Singapore from the perspective of a street-influenced designer, start your day at Peninsula Shopping Centre and Peninsula Plaza, one of Mark’s haunts as a young skateboarder.

“When I was younger, I would always go to the skate stores at Peninsula Plaza, just to look at gear and hang out.” Singapore’s punk spirit still thrives in these shopping complexes, with stores selling rock music equipment, street apparel and affordable skate gear.

Break for lunch at Lokkee, a restaurant that serves up Chinese cuisine with a Western twist. Much like his own sneaker designs, Mark enjoys food that favours cultural fusion presented unconventionally:

“You can get Chinese cuisine anywhere in Asia, but I’ve never had Asian food as unique as what’s served up at Lokkee,” he enthuses. Menu staples at Lokkee include braised beef served in a flaming pineapple and pork crackling in fermented beancurd.

Spend the mid-afternoon relaxing by the water at Marina Bay Sands®, one of Singapore’s largest luxury shopping malls. Since its opening in 2010, the integrated resort’s iconic architecture has transformed Singapore’s skyline. It is, coincidentally, Mark’s current favourite place to skate at during the weekends.

“The area under the Helix Bridge and near the ArtScience Museum™ is one of the most beautiful places in the world to skate right now,” Mark observes. “The ground is perfect, and this is the downtown area so people are dressier. It’s also by the water, and if it’s too sunny, we can go under the Bridge.”

Should you wish to purchase Mark’s iconic sneakers, visit Limited EDT Chamber, a sneaker store in the basement of The Shoppes at Marina Bay Sands®. This boutique store stocks—you guessed it—limited edition kicks. Mark’s camouflaged-marked creations have had pride of place here.

“Camouflage is a consistent theme in my work,” he shares. “Most of the time, a portrait looks better on a picture than a shoe. Camo[flage] feels like it belongs [on a pair of sneakers].”

All that activity should have you famished, thirsty and ready to put up your feet: end your night off with dinner, live music and cheap beer towers at Third & Sixth, along Seah Street. “Third & Sixth plays 90s rock music, serves great burgers, and has reasonably priced beers,” Mark enthuses. “It’s great for when I don’t feel like drinking at home.” 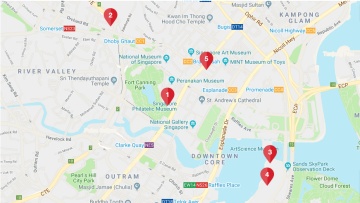