A 2-day guide for urban explorers As a child, Yinzhou grew up on Geylang’s busy streets and hidden back alleys. The young explorer now spends his days sharing the neighbourhood’s stories with Geylang Adventures. To Yinzhou, every space in Singapore has the potential to be a classroom, with important lessons to be learnt and uncovered. 1 Shophouses at Lorong Bachok and Lorong 24A

To experience history through the lens of architecture, start your day with an exploration of the traditional shophouse at the junction of Lorong 19 and Lorong Bachok. “The [exterior designs of the] shophouses here are quite timeless,” Yinzhou says. “There are beautiful decorative elements made from Madras chunam (a mixture of water, egg shells and egg white, sugar and lime).”

For a study in contrasts, take a stroll to the eight conservation shophouses along Lorong 24A. Designed by seven local architects in a collective project, each shophouse has a similar, conserved façade, but a uniquely-designed interior. “The truth is, we can’t keep old things the way they are all the time,” he observes. “We have to inject meaning [into old spaces].” Continue your day of exploration at an establishment that has personal significance to Yinzhou; The Panic Room is a modern barbershop, where he learnt the nuances of giving a good haircut. “The owner of The Panic Room was super nice about letting us check them out [and learn the basics of barbering].” The lessons in grooming that Yinzhou learnt here proved useful in helping him kickstart his first social project, Back Alley Barbers, which offers free haircuts for Singapore’s migrant labourers. “I made friends with Jeff [the owner of Eng Tiang Huat], while he was out walking his dog,” Yinzhou says. “They’re a cultural shop that sells traditional Chinese Opera instruments and costumes.” Apart from housing treasures like a Chinese Opera dao (sabre), the store also provides a great deal of insight into the past, with its range of Chinese cultural artefacts. DAY 2: OFF THE BEATEN PATH

To learn about the lives of Singapore’s past generations, Yinzhou recommends taking a tour of Bukit Brown Cemetery, the largest graveyard outside of China. With over 100,000 tombs scattered across the area, history buffs will be able to gain a deeper understanding of the pioneers who built the foundations of Singapore.

“It’s very easy to lose yourself in Singapore’s beauty, with locations like Marina Bay Sands® and Orchard Road,” he says. “But that’s because there were generations of people who went through hardships to get to where we are now.”

Spend your afternoon at Tiong Bahru, one of Singapore’s oldest housing estates, where you’ll gain insight into how Singaporean culture and architecture have grown and intermingled over the decades. Developed in the 1920s, Tiong Bahru has since evolved into a creative enclave, with a range of bars, cafes and boutiques nestled amidst its old-school architecture. “The food at [Tiong Bahru Market] is pretty good,” he expresses, “And there’s a nice contrast in the flats [found in the neighbourhood].”

An island resort off Singapore’s Southern Coast, Sentosa is home to sandy golden beaches and a wide array of attractions and outdoor activities. Those looking to push their boundaries can test the limits of their courage at AJ Hackett International, which boasts adventurous activities like bungy jumping and vertical skywalks.

The island holds significant memories for Yinzhou, who spent his teenage years studying at Temasek Polytechnic’s Tourism Academy that was previously located in the middle of the island. “I’d spend my morning swimming at the beach, and then running around Sentosa,” the former triathlete reminisces. “I love exploring that island.”

End your day with a stroll along the seaside at Changi Beach, while watching the sun set. An avid outdoorsman and former triathlete, Yinzhou recommends that you take the opportunity to engage in a bout of outdoor activities while there. “You can check out Constant Wind Sea Sports Centre at Changi, it’s great for windsurfing and kayaking.” Explore the waters around Singapore and uncover a whole other world. 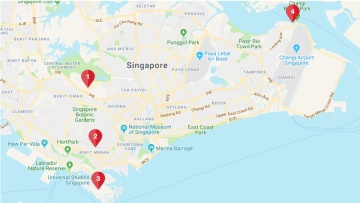