The Bras Basah.Bugis precinct is the arts and heritage district in Singapore's civic centre, and home to museums and monuments.

Rows of shops and pushcarts at Bugis Junction. Once the home of Bugis traders and merchants, the district is now home to bustling shopping malls like Bugis Junction.

Façade of the National Museum of Singapore. 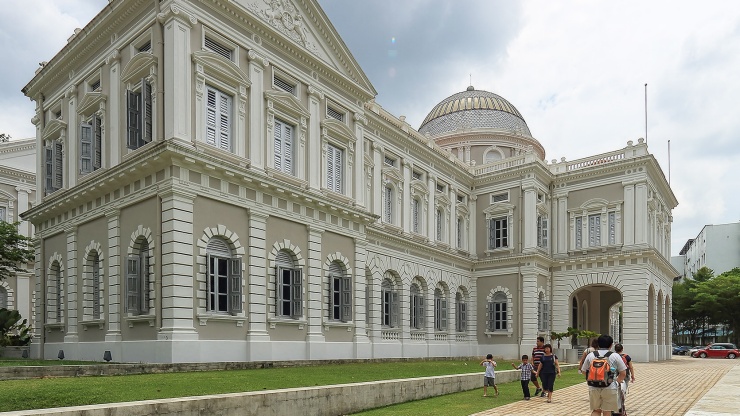 As one of Singapore's oldest neighbourhoods, Bras Basah is full of interesting history.

A family's day out at Bugis Street. Call it the Triple B if you must, but the Bras Basah.Bugis precinct is the place to go for a slice of Singapore’s rich heritage, preserved architecture and palpable energy.

Head here for fine museums, national monuments and other institutions, such as art schools and the Central Public Library.

One of Singapore’s oldest districts, Bras Basah derived its name from the Malay term ‘wet rice’ which were once laid out on the banks of Bras Basah River (known as the Stamford Canal today).

The founder of Singapore, Sir Stamford Raffles, picked the area to be the European part of Singapore Town. To the growing multicultural communities, it was also ideal for schools and places of worship.

The adjacent Bugis Street, named after the seafaring Bugis people from Indonesia who came here to trade with local merchants, has a colourful past. Historically, it was the haunt of sailors, hawkers and military personnel.

Today, you could spend days just soaking in the vibe of this buzzing district. The Bras Basah.Bugis neighbourhood is home to museums such as the National Museum of Singapore and Peranakan Museum, and national monuments like the Armenian Church and Central Fire Station, Singapore’s oldest fire station.

The School of the Arts, Singapore Management University, Nanyang Academy of Fine Arts and LASALLE College of the Arts are here as well, and visitors may wish to visit the latter to admire its distinctive architecture and soak in the creative vibes.

Get in on the action with the annual Singapore Night Festival in August, with late-night openings and special events.

The Bras Basah.Bugis area was once home to top schools like St Joseph’s Institution, Tao Nan School and Convent of the Holy Infant Jesus. These preserved buildings have been turned into museums, shops and eateries.

Learn more about the country’s history and culture at the National Museum of Singapore, which is also an architectural icon.

Built in 1835, the Armenian Church is the oldest Christian church in Singapore and an architectural masterpiece.

Shop for high street brands at Bugis Junction then cross the connecting bridge to Bugis+, with its massive, crystal-like façade.

Pick up a bargain deal at the revamped Bugis Street, with over 600 shops offering everything from chic fashion to beauty services.

A whimsical retail store that sells a charming variety of accessories, stationery and knick knacks, Cat Socrates is a great place to visit if you’re hoping to pick up a souvenir or two.