This gazetted national monument at Esplanade Park commemorates one of Singapore’s heroes from World War II. 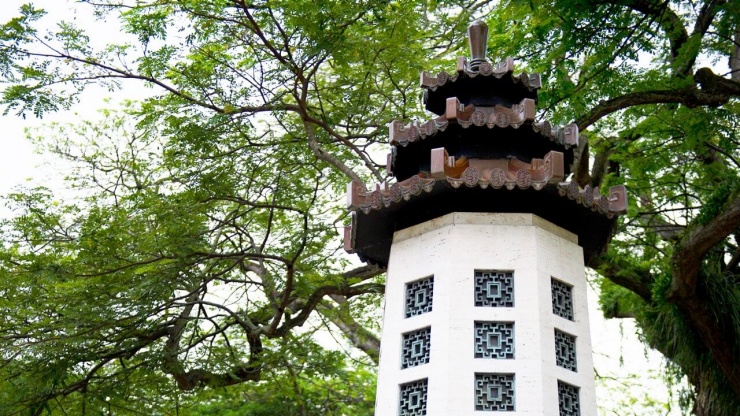 The Lim Bo Seng Memorial at Esplanade Park is a tribute to Major-General Lim Bo Seng, one of Singapore’s many war heroes during World War II.

This prominent Hokkien businessman led many anti-Japanese activities before and during the Japanese Occupation, including fund raising to support the war effort in China, and the creation of an intelligence network in Malaya.

Betrayed by a spy, he was caught by the Japanese Secret Police in Ipoh, held captive and tortured. He died in the Batu Gajah Jail on 29 June 1944.

He was posthumously awarded the rank of Major-General by the Chinese Nationalist Government. On 13 January 1946, the British brought Lim's remains to Singapore and reburied him with full military honours at MacRitchie Reservoir, where his grave still lies today.

Unveiled in 1954, the Memorial was designed by architect Ng Keng Siang, on a site donated by the government. Construction was funded by donations from the Chinese community.

The 3.6-metre-high octagonal pagoda is made of bronze, concrete and marble is an important work of Chinese National Style architecture, and is the only structure in Singapore that commemorates an individual from World War II.

The pagoda has a three-tiered bronze roof, with four bronze lions at the base. Do take the time to read the four bronze plaques—they give an interesting account of Lim’s life in English, Chinese, Tamil and Jawi (Malay).

On 28 December 2010, the Memorial was collectively gazetted as a National Monument with The Cenotaph and Tan Kim Seng Fountain.