Learn more about the tenacity of the prisoners of war and civilians interned in Changi prison camp during World War II, with a trip to the Changi Chapel and Museum.

Quiet and solitude at the Changi Museum Explore our wartime past by learning about the Fall of Singapore and the infamous Changi Prison.

Remembering a somber past

It is hoped that the POWs, civilian prisoners and their families can find closure from the war here and the Changi Museum. 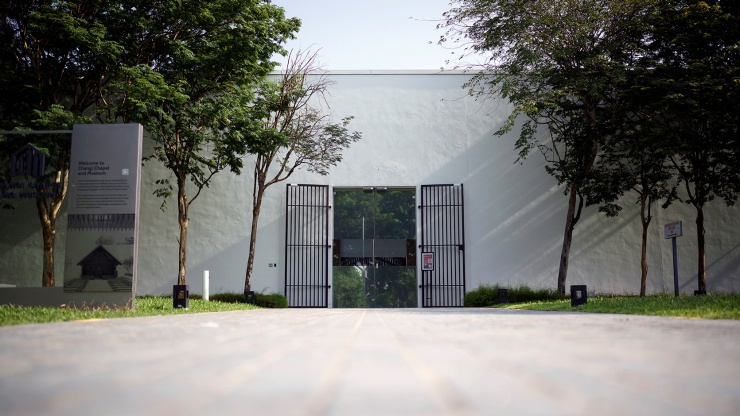 Take the time to visit the other historical sites and attractions that surround the area such as the Changi Chapel, Changi Village and Changi Beach. Photo by National Heritage Board

World War II was a catastrophic event that affected the lives of millions of people around the world. The Changi Chapel and Museum sheds light on this tumultuous era, and the events that occurred in Singapore from 1942 to 1945, during the Japanese Occupation.

Opened in 15 February 2001—a date that coincides with the anniversary of Singapore’s fall to the Imperial Japanese Army—the space pays respect to the prisoners of war (POW) and civilians interned at Changi prison camp.

Closed for major redevelopment to its infrastructure in 2018, the museum reopened its doors on 19 May 2021, evolving to convey its many stories from the past.

Stories of strength amidst sorrow Photo by National Heritage Board

More than a sober reminder of war’s violence, Changi Chapel and Museum stands as testament to the tenacity of the human spirit.

With donations and loans from families of the internees, the museum now showcases 114 artefacts across eight exhibition zones, delving into their daily lives, struggles and liberation upon the conclusion of the war.

The museum’s first four zones document the evolution of Changi from the 19th century to the 1920s, the fall of Singapore during World War II, and the lives of soldiers and POWs imprisoned at Changi.

The latter four zones delve more deeply into the everyday lives of the internees, documenting their resilience and creativity amid hardship, their subsequent liberation, and their legacies after the war.

While Changi Chapel and Museum illuminates the broad arc and span of history, the space also focuses intimately on the stories of those imprisoned at Changi.

A projection show sets the historical context of Changi, from the area’s idyllic pre-war atmosphere to the beginning of the three-and-a-half year Japanese Occupation.

The museum’s recreated Changi Gaol cell lets visitors step into the shoes of the internees, and understand the cramped confines in which they were imprisoned. Re-enacted recordings of conversations between them offer a glimpse into their daily lives and living conditions.

Of the 114 artefacts housed at Changi Museum and Chapel, 82 are on display for the first time, with 37 being donations and loans from the public.

Artefacts on display include a 400-page diary and replicas of the Changi murals, which were painted by Bombardier Stanley Warren and depict scenes from the Bible. Visitors will also find everyday objects painstakingly hidden by the internees, such as a Kodak Baby Brownie camera, and a matchbox with a hidden morse code.

Beside these poignant reminders of the past, the museum is home to a database of over 50,000 POWs and civilian internees. Visitors are welcome to contribute to this archive of stories, ensuring that the legacies of those who passed through Changi’s gates live on.

Free guided tours of the museum space are available via pre-registration, and visitors can check the Changi Chapel Museum. Do take note that tour group sizes are subject to current safe distancing measures.

Visitors are encouraged to pre-book their admission tickets via the museum website or chatbot. The latter will also grant access to audio tours and virtual guides to World War II sites in the vicinity.

Before leaving, be sure to peruse the merchandise at the MUSEUM LABEL store.