The sky’s the limit

The soaring lines and stunning views of majestic residential estate Pinnacle@Duxton will make you forget your fear of heights. With its soaring lines and elegant architecture, the Pinnacle@Duxton is a prominent landmark that’s hard to miss. 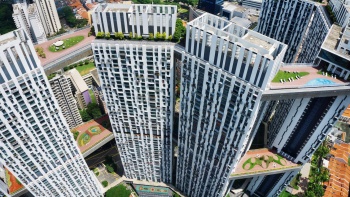 Soaring above the skyline of the neighbourhood, Pinnacle@Duxton is a testament to our nation’s innovative approach to urban planning and public housing.

Built on the site of Singapore’s oldest Housing & Development Board (HDB) blocks, its design and construction both revitalises the area and commemorates its historical significance.

A design competition was held and won by two local architectural firms, who worked together to create simple and elegant residences, using precast technology.

Completed in 2009, the Pinnacle@Duxton stands out as an example of how HDB confronts the challenges of meeting housing needs in an urban setting. Its seven 50-storey high towers rise as high as skyscrapers and are linked at the 26th and 50th levels by skybridges. It is the HDB’s first residential project with sky bridges connecting the towers.

High in the sky

Each skybridge is home to a 500-metre-long sky garden. In fact, a few records are set by Pinnacle@Duxton: the world’s tallest public housing development and longest sky gardens.

The development has also won various awards, including the 2010 Best Tall Building Asia and Australasia award by the Council on Tall Buildings and Urban Habitat, as well as the President’s Design Award For Design of the Year 2010. It’s most recent accolade was awarded in 2019, by the Chicago-based Council on Tall Buildings and Urban Habitat. The development was lauded for long-term and extraordinary contributions to the urban environment, winning top place in the awards’ 10-year category.

The 50th-storey skybridge is open to the public, and for a charge of S$6 you can enjoy stunning views of the city. More information can be found here.

Learn about the evolution of public housing in Singapore with the Housing & Development Board’s LIVINGSPACE Gallery, located at HDB Hub in Toa Payoh.