Whether it's a celebration with your favourite toys from Toy Story, or taking you to a galaxy far, far away, this is where world-class storytelling begins.

Photo by Gardens by the Bay 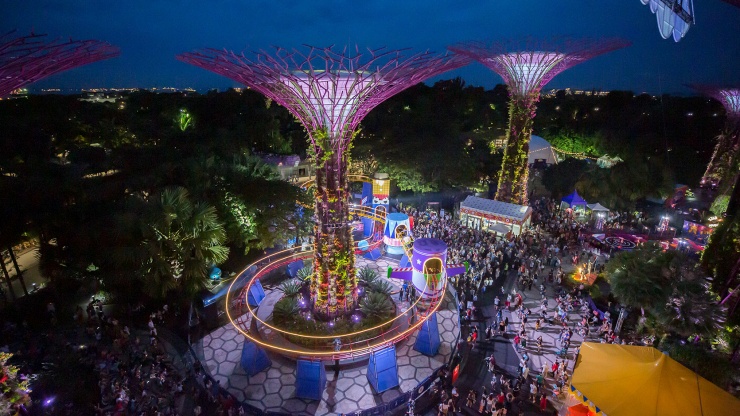 It was fun for all ages at Gardens by the Bay’s Children’s Festival 2019, featuring Disney and Pixar’s Toy Story 4. 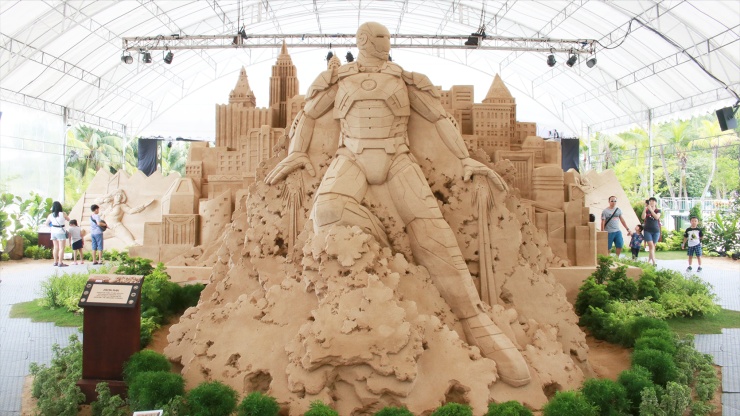 Larger-than-life sculptures featuring heroes and villians from the MARVEL universe took over the sands of Siloso Beach for Sentosa Sandsation: MARVEL Edition. 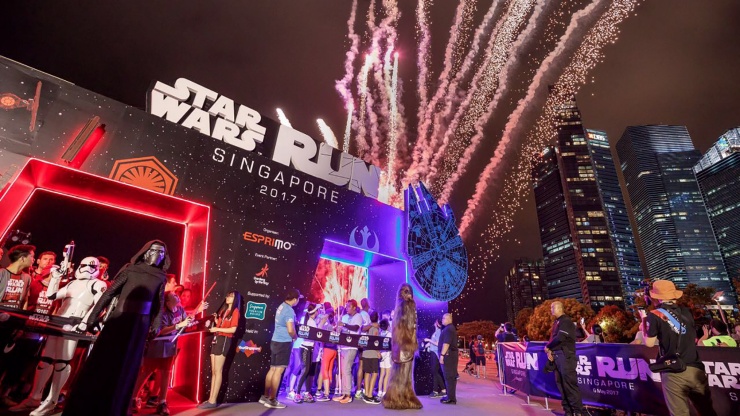 Local and visiting fans alike celebrated STAR WARS DAY in Singapore with the first-ever STAR WARS Run in the city. 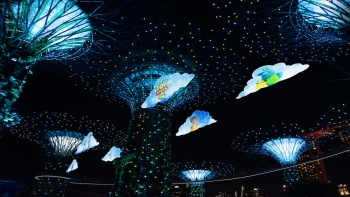 A first for Disney in Southeast Asia, Singapore Tourism Board (STB) and Disney began a three-year collaboration in 2017 that aimed to provide unique and fun experiences themed around Disney’s biggest brands and most popular stories and characters.

It started with STAR WARS DAY: MAY THE 4TH BE WITH YOU Festival that featured a plethora of events and activations, from the first-ever STAR WARS Run in Singapore to the “Sabertrees”, where the iconic Supertrees at Gardens by the Bay were transformed into lightsabers.

In 2019, beloved toys from Disney and Pixar’s Toy Story 4 took the spotlight at Gardens by the Bay’s Children’s Festival. With carnival games, a unique Toy Story 4-themed Garden Rhapsody, a giant marble track weaving through the Supertrees and special appearances by Woody and Buzz Lightyear, it was fun for fans of all ages!

Among the many activities at the Children’s Festival last year were exclusive drawing workshops hosted by Pixar Animation Studios artist Mara MacMahon, who was the character designer and modeller lead for the character of Bo Peep in Disney and Pixar’s Toy Story 4. The first of its kind to ever feature a Pixar artist in Singapore, the workshops were an exciting and unique experience for young aspiring animators and artists.

THE BEST OF DISNEY MAGIC IN SINGAPORE A Night of Disney+ — A magical evening at Marina Bay

Marina Bay was transformed into a wonderland of lights, music and beloved characters on 24 February 2021, with ‘A Night of Disney+’.

Celebrating the launch of the Disney+ channel in Singapore, the event featured performances by beloved local singers like JJ Lin, Nathan Hartono and Benjamin Kheng, crooning classic tunes from movies like Aladdin and The Little Mermaid.

The festivities also included a spectacular lightshow, which projected characters from Disney hits such as Frozen and The Mandalorian onto iconic structures across the district including the ArtScience Museum and National Gallery Singapore. At last year’s Children’s Festival at Gardens by the Bay, the Supertree Grove was transformed into the ultimate playground for both the young and young at heart with Disney and Pixar’s Toy Story 4-themed attractions. Think carnival games, obstacle courses, oversized capsule machines, a giant marble track running amongst the Supertrees, an adorable version of Garden Rhapsody featuring characters from Toy Story 4 and meet-and-greet sessions with Buzz Lightyear and Woody! 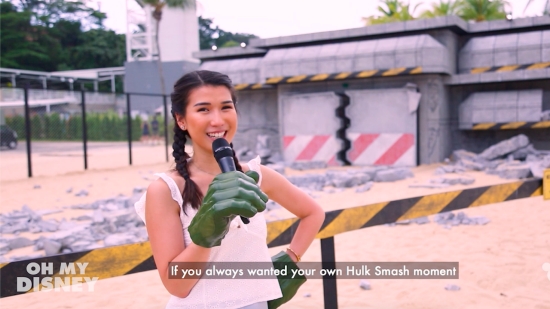 From Iron Man to the Guardians of the Galaxy, 15 colossal sculptures arose from the sands of Siloso Beach under the masterful hands of internationally-acclaimed sand sculptor Jooheng Tan and his team. The MARVEL-themed activity stations, such as Hulk Smash, Freeze Frame Station and Hero Action Centre,  added more power-packed fun to the festival. Fans even got to take home an exclusive Singapore-themed MARVEL comic book! 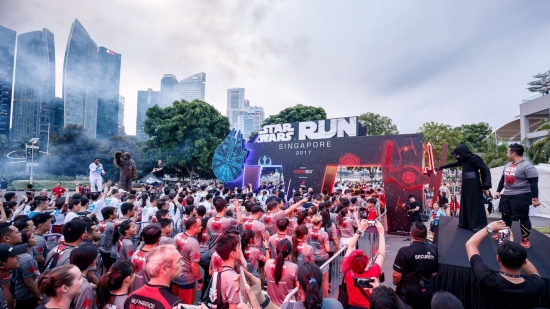 STAR WARS DAY: MAY THE 4TH BE WITH YOU Festival

From a galaxy far, far away and into our bustling island; fans gathered in the heart of the city for the first-ever STAR WARS Run in Singapore to celebrate May The 4th – or Star Wars Day. The three-day festival fanfare continued at Gardens by the Bay with a STAR WARS-themed “silent disco”, special appearances by Chewbacca and Kylo Ren, a screening of Star Wars: The Force Awakens and Garden Rhapsody: STAR WARS Edition, a light show set to the film franchise’s iconic music, all under the glow of the “Sabertrees”. At the STAR WARS DAY celebrations in May 2017, Gardens by the Bay’s iconic Supertrees became “Sabertrees”, illuminating the night sky with pillars of red and blue light reminiscent of lightsabers from the STAR WARS universe. It was spectacular! 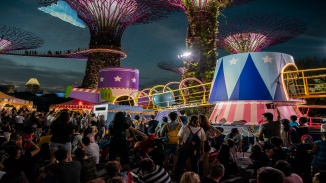 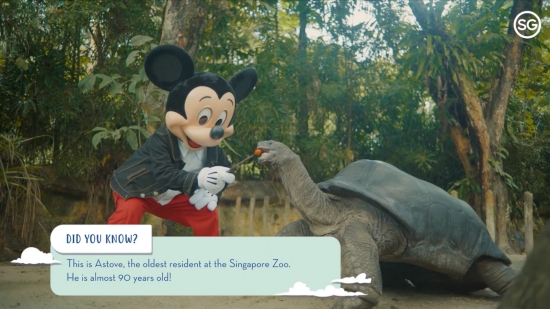 Destination: Singapore! Follow Mickey Mouse as he explores some of Singapore’s greatest attractions. Watch all three videos to find out where Mickey spent his time in the Garden City and learn fun facts about the locations as you go along!

In the first part of his journey, Mickey visits the world’s tallest indoor waterfall at JEWEL Changi Airport, the lush flora at Gardens by the Bay and the animals at Singapore Zoo and River Wonders, before catching a gorgeous sunset at the picturesque Sentosa. 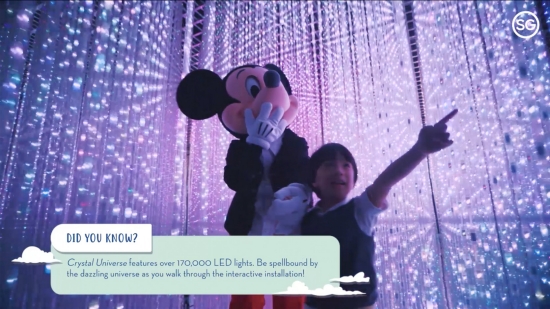 Discover some of Singapore's world-class museums with your pal Mickey Mouse! Find your muse at the National Gallery Singapore, trace your roots at the Asian Civilisations Museum and immerse yourself in the magic of science at the ArtScience Museum. 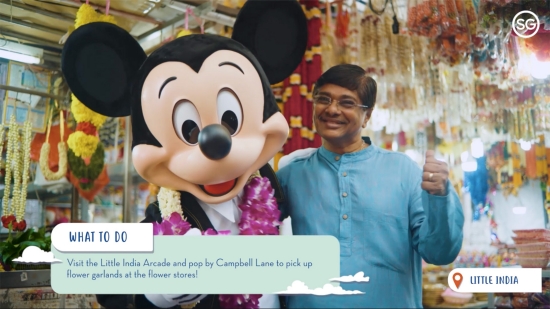 Mickey Mouse is on a mission to explore Singapore’s heritage neighbourhoods! From experiencing Peranakan culture at Katong Joo Chiat to hunting down some of the coolest murals around Chinatown, join Mickey on his journey to discover culture and tradition in the finale of his magical tour of the city.