Eating is an elaborate affair in Singapore, but feasting like a local goes beyond tasting delectable dishes. Dig into longstanding practices, learn about etiquette at the dining table and savour the experience of eating like a true-blue Singaporean, with our guide to norms and dining culture in Singapore. Wander around any of the hawker centres in Singapore and you’re likely to see tissue packets and even umbrellas on tables and chairs.

Of all the ways one can reserve seats at a table, Singaporeans have chosen to use dispensable objects to claim their spot.

This behaviour—known as chope-ing (reserving) a seat—has developed as a fuss-free way for Singaporeans to identify the potential seats available, and save them the hassle of waiting around with trays of food.

So, the next time you’re at a hawker centre and see empty tissue packets or umbrellas at unoccupied tables, you’ll know why.

2. Use local slang to talk about food 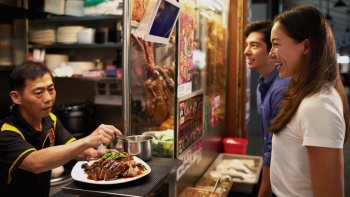 Being a multicultural society, Singaporean slang – also known as ‘Singlish’ – is made out of a medley of different dialects. Makan, dabao and shiok are just some of the many words you’ll hear uttered by local foodies. To shed some light on what they mean, here are some direct translations of these dialects.

3. Endear yourself with this respectful term 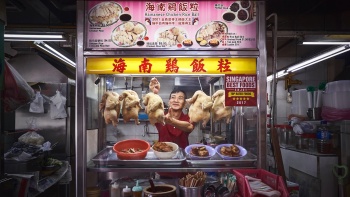 First-time visitors to Singapore may be confused when hearing locals referring to elders as ‘uncle’ and ‘aunty’.

In case you’re wondering—no, we’re not all related. This is merely how younger Singaporeans show respect and courtesy towards their elders, values that are hallmarks of many Asian cultures.

You can try this out for yourself if you’re ordering from a hawker who’s older than you are (just don’t say it if you’re roughly the same age). You’ll likely get a friendly smile in return, and possibly even a larger food portion!

4. Master the local lingo for drinks 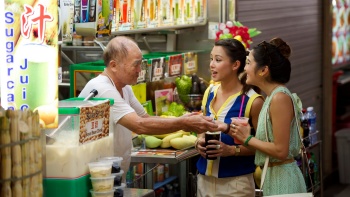 Given Singapore’s bracing tropical heat, you can bet that the drinks stall at hawker centres like Bedok Marketplace and Adam Road Food Centre have snaking queues.

And because Singapore is a fast-paced society, local slang is used during orders to hasten the ordering process. Part of the fun in ordering drinks comes with mastering usage of these terms, which marks you as being acquainted with the culture.

Here’s a handy guide (with pronunciations in square brackets) that’ll have you ordering like a local in no time:

As you become conversant with these terms, you’ll be able to order more complex variations of coffee. To display your mastery, try ordering a kopi C gao kosong peng (extra strong ice coffee with evaporated milk and no sugar)!

5. Bond over a zi char meal 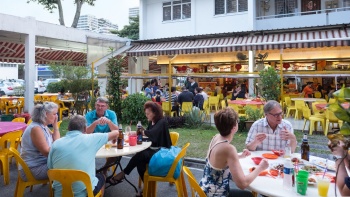 Singapore’s predominantly Asian community tends to think of eating as a communal affair, a mindset which translates into various facets of our cuisine.

Zi Char is a Hokkien (Southern Chinese language) term, which translates to “cook and fry”. It’s used to describe home-cooked Chinese dishes that are best enjoyed when shared in group settings.

There’s an endless list of delectable treats waiting to be explored but to get you started, pay a visit to the zi char stalls in Lau Pa Sat, Maxwell Food Centre and Golden Mile Food Centre.

6. Engage in our national pastimes—Eating and queuing! 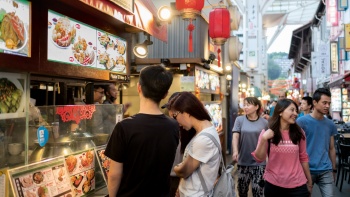 If eating and queuing were Olympic sports, it’s probable that we’d be gold medal contenders.

Before millennials recognized the ‘fear of missing out’ (FOMO), Singaporeans were already in on the game, although we call it ‘being kiasu (afraid of losing out)’. If you see a snaking queue in front of a hawker stall, you can rest assured that the food served is certainly worth the wait. 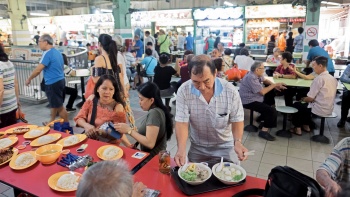 Due to the busy nature and popularity of our local hawker centres, tray return stations for dishes are allocated in a specific corner of most establishments. Singaporeans are encouraged to be considerate of the next diner by returning trays, plates and cutlery.

There are separate stations for halal and non-halal cuisine, so do remember to return your tray to the respective station. 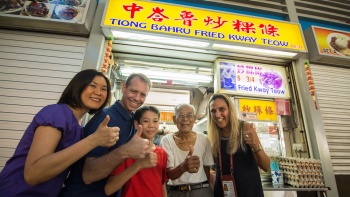 With its multicultural history, Singapore is home to a diverse blend of races and cultures, including Malays, Chinese, Indians and Peranakans*. While we won’t be able to cover the nuances of etiquette in all cultures, here are some tips on common dining practices:

How to feed your food obsession