Exploring the city through architecture

Singapore’s cityscape is a sight to behold. From colossal towers to a national monument that houses a heritage hawker centre, the city’s full of architectural wonders. A long-standing landmark in the heart of the Central Business District, Lau Pa Sat has been witness to Singapore’s ever-changing landscape, from mudflats to metropolis. Built in the 19th century, the 120-year-old market was once a meeting point for push-cart street vendors. It has since grown into a much frequented destination for hawker food, where Singaporeans and travellers alike flock to for authentic local fare. Lau Pa Sat is truly a melting pot of cultures—here, you can marvel at the building’s soaring arches, Victorian columns and delicate architectural details whilst dining on affordable local delicacies such as satay (grilled skewered meat) from any of the stalls along ‘satay street’ (a designated satay section only open from 7pm onwards), dim sum (bite-sized portions of food served in steamer baskets or small plates) from Bao Luo Wan Xiang, and Filipino classics such as lechon kawali (fried pork belly) from Ang Hapag Kainan.

For a luxurious experience in Singapore, treat yourself to the splendour of one of the country’s most beloved hotels. Named after Singapore’s founder, Sir Stamford Raffles, Raffles Hotel (est. 1887) is Singapore’s oldest hotel. Its characteristic neo-Renaissance architecture—high ceilings, tall French windows, extensive verandas, and marble floors—is the last of its kind in Singapore. Snap some Instagram-worthy shots at the entrance’s grand façade, or have a taste of the iconic Singapore Sling at the hotel’s Bar & Billiard room. 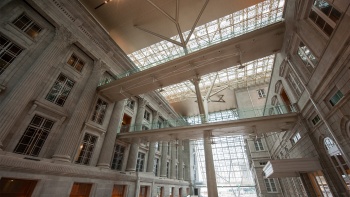 The National Gallery Singapore may have opened its doors recently in 2015, but the buildings that house the museum are steeped in history—established since 1900, they were once home to the Supreme Court and City Hall. Immerse yourself in the largest public collection of modern art in Singapore and Southeast Asia, while you make your way through the beautifully restored museum and admire the gorgeous architecture all around. You can also sign up for the National Gallery Building Highlights Tour, which will provide insight on the rich history and architecture of the buildings. 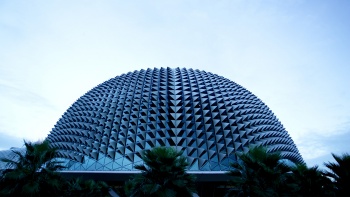 Esplanade – Theatres on the Bay

For a sense of the arts scene in Singapore, head to Esplanade – Theatres on the Bay, a sprawling performing arts centre. Opened in 2002, the arts hub has earned the moniker—‘the durian’—due to its aluminium facade, which bears a resemblance to the local favourite fruit. Complete with concert halls, a library, outdoor performing spaces and shopping options, you can spend a whole day here. Interested in learning more about the design and architectural workings of the building? Sign up for their guided tours.

A noteworthy silhouette on Singapore’s skyline, Marina Bay Sands®, sloping towers and towering SkyPark® are a feat of modern architecture and engineering. The definitive structure is home to a hotel, convention centre, theatre, museum, shops and celebrity restaurants such as Bread Street Kitchen, Cut by Wolfgang Puck and more. Head to the SkyPark® for the best vantage point of the city—it’s definitely an Instagram-worthy photo opportunity. Or, if you’re up for some pampering, book a stay at the hotel and be sure to take a dip in the world’s largest rooftop infinity pool.

Nature-lovers will feel right at home in Gardens by the Bay. But plant enthusiast or not, prepare to be wowed by the giant glasshouse that is the Cloud Forest. The Cloud Forest’s architectural highlights include the world’s tallest indoor waterfall, a sweeping grid-shell exterior, and elevated walkways immersed in lush greenery and veiled in cooling mist. Here, you’ll get to see a range of unique biodiversity and breath-taking modern architecture side-by-side. In the mood for nostalgia