Singapore takes its carbon footprint seriously. Sustainability and eco-friendliness are two watchwords that maintain our reputation as a ‘City in a Garden’—and the shopping centres here are doing their part to save the planet while providing shoppers a stellar retail experience. From energy-efficient fittings to architectures that reduce the amount of air-conditioning needed, these five malls are leading the way in environmentally-friendly design. 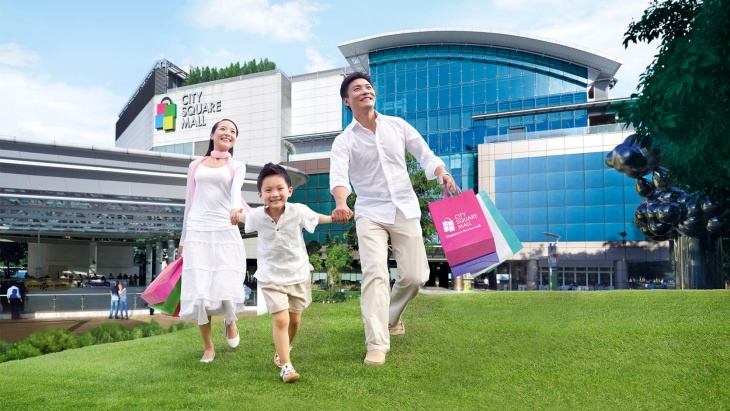 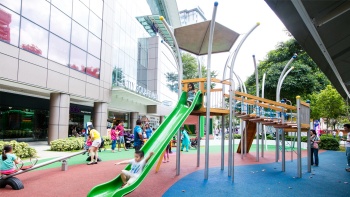 Family-friendly City Square Mall is the first mall in Singapore to have been built with eco-conscious principles in mind, paving the way for other malls to follow suit. It saves on electricity by allowing natural sunlight to pass through its glass roof, which optimises day-lighting and uses light-emitting diode (LED) lighting on its façade.

The crown jewel of the mall’s green plans is City Green, a 49,000-square-foot urban park that’s integrated into the shopping complex. The park is outfitted with a green roof that harnesses solar energy, collects rainwater and promotes cross-ventilation. A portion of the park bears posters and signs that tell the mall’s green story: for example, how it recycles enough condensate water from air-conditioning to fill two Olympic-sized swimming pools every year.

A few of the tenants have also taken up the eco-friendly gauntlet. A branch of NTUC FairPrice in City Square Mall is the popular supermarket chain’s first green outlet on the island. It uses biodegradeable plastic bags, energy-efficient refrigerators and shoppers who bring reusable bags can scoot past the queues to dedicated checkout counters. Singapore’s first naturally cooled open-air mall swaps four walls for a permeable building shell that encourages airflow, so it does not have to rely on air-conditioning to cool its interiors. It means The Star Vista’s many restaurants—more than half its tenants are devoted to dining and drinking—are semi-alfresco. So when you have a meal at Japanese eatery Itacho Sushi or fast food chain Texas Chicken, you won’t be working up a sweat, thanks to the constant breeze that blows through the mall.

Lush greenery is also planted on the fringes and corridors of the mall. These plants, more than just easy on the eyes, cool shoppers down as they hop from musical instruments outlet Swee Lee to lauded confectionery Awfully Chocolate.

Among the glitzy malls on Orchard Road, 313@Somersetstands out for its environmentally-friendly efforts, which benefit not only the earth but also its shoppers. For example, the mall’s energy-efficient air-conditioning system lowers the overall temperature while reducing white noise, which in turn enhances your overall shopping experience. The mall’s escalators also automatically slow down when not in use and only starts up when you step onto them. With 313@Somerset’s roster of international brands such as Zara, Forever 21 and MUJI, you can spend a whole afternoon shopping here.

A hidden gem is the mall’s Sky Terrace on the fifth level. It has rotating columns of plants that are irrigated using harvested rainwater, and a small toddler’s play area for parents looking to put their feet up after exploring the mall.

To refuel, head to JiBiru for its Japanese small plates and craft beer, Brotzeit for hearty Bavarian fare, or Marché Mövenpick for a smorgasbord of European dishes. If it’s a strong cuppa you’re after, look no further than Oriole Coffee + Bar.

Its ice cube-resembling architecture is no coincidence: JCube is home to Singapore’s first Olympic-sized ice-skating rink, which deploys several eco-friendly features to reduce its overall environmental impact. Ice shavings from the rink are recycled, and even waste heat from the ice rink chiller is channelled into the facility’s shower rooms and Zambonis (the machines used to resurface the ice).

Because of the rink, the temperature in JCube seems to be a few degrees Celsius lower than its neighbouring malls Jem and Westgate but the mall offsets it by harnessing solar energy via solar panels. There’s plenty going on behind-the-scenes that shoppers don’t see, too: on the roof sits a rainwater-harvesting tank that stores water to irrigate the mall’s landscaping and in the staircase landings, LED lights are activated only when the stairs are in use.

Over on the shopping side, JCube appeals to the younger folks with its trendy J.Avenue retail space. More than 100 independently owned boutiques flaunt the latest Korean fashion, from stylish threads to backpacks emblazoned with cute prints. Don’t forget to leave your mark by uploading a selfie onto the enormous LED Social Wall right at the entrance of J.Avenue.

This mall takes the phrase “go green” literally: palm trees line a naturally ventilated atrium on the ground level, while vertical green walls deck the interiors and façade. Additionally, glazed glass on the mall’s exterior and special ‘wind corridors’ harness the breeze, all of which cool the building and reduce its reliance on air-conditioning.

These features, along with tenants that appeal to everyone, make shopping in Westgate a comfortable experience for the whole family. The gents can hit up Armani Exchange for a new suit, the women have Pandora for jewellery, and even the children are catered to with Kiddy Palace, which stocks strollers, clothes and toys. Crowning the entire mall is Westgate Wonderland, a playground on the rooftop whose centrepiece is a 10-metre-tall treehouse.

Singaporean brands that make a difference