Art doesn’t have to be found on the walls of a gallery. While Singapore certainly has its share of world-class museums, exhibitions and art spaces, it’s also home to a wealth of street art and iconic wall murals.

Go on a hunt through Singapore’s diverse neighbourhoods—from the South Asian enclave of Little India to the lively streets of Chinatown—and discover art that will both inspire and expand your artistic sensibilities. 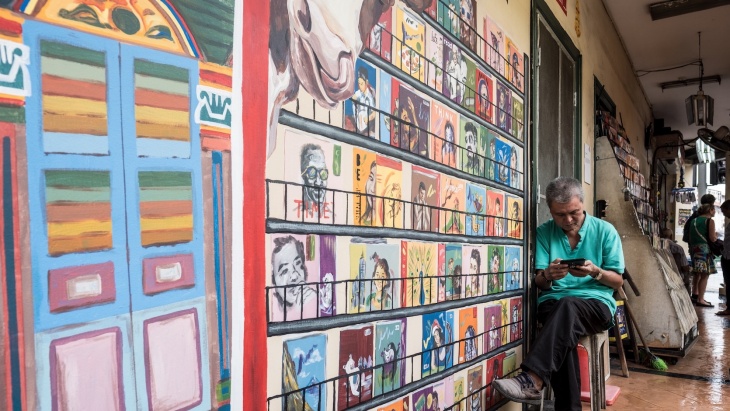 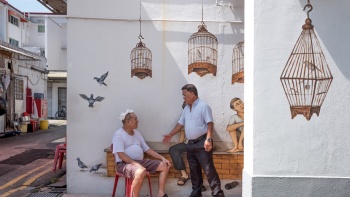 Find new meaning in longstanding places at Tiong Bahru, a district that’s both Singapore’s oldest housing estate and one of its most vibrant creative hubs. This fusion of old and new is best exemplified by the various murals that dot the neighbourhood. These works of street art were painted by contemporary artist Yip Yew Chong, and revolve around scenes from the precinct’s past. The cages depicted in the murals memorialise traditional bird singing corners, where hundreds of bird-lovers would gather to admire prized avian pets. 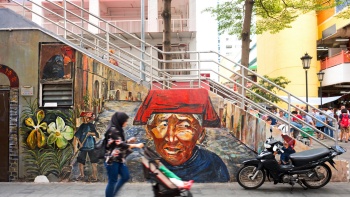 Begin your hunt for Chinatown’s wall murals at Banda Street, along Chinatown Complex. Mural artist Belinda Low’s influences include Van Gogh’s revolutionary style of post-Impressionism, and the resilient spirit of strong women. Many of her pieces include wistful depictions of the pioneers who built our nation, from fishermen and labourers to Samsui women (female migrants from Sanshui District, China, known for their iconic red headscarves).

From Chinatown Complex, take a stroll towards Keong Saik Road, and make your way towards The Working Capitol Building. The walls of the streets around this co-sharing space have been filled with floral motifs, paying homage to the traditional Peranakan* tiles that you’ll observe on buildings in the vicinity. Ripple Root—the youthful design duo behind this mural—are known for creating whimsical designs inspired by nature and wildlife. 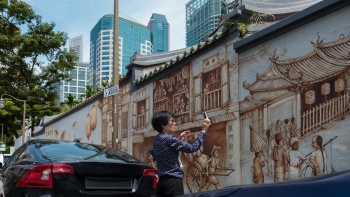 Your last stop in the neighbourhood will be at Amoy Street. Along the back wall of the 177-year-old Thian Hock Keng Temple, you’ll find a 40-metre-long mural, depicting the life stories of Singapore’s early Hokkien migrants. This piece of art movingly illustrates the hopes, struggles and sacrifices of Singapore’s earliest generation, and how they’ve shaped Singapore into the country it is today. 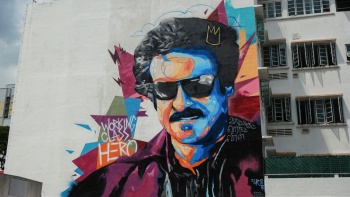 Pay a visit to Hindoo Road in Little India, and chances are that you’ll spy a wall adorned with the portrait of iconic Tamil film star Rajinikanth. Painted by Mohamed Zulkaernaen (who goes by the moniker of ZERO), the mural pays tribute to the Indian community and migrant workers who live in the area. Upon learning of Rajinikanth’s rags-to-riches story, the artist was moved to paint his likeness, and to foster a sense of hope in those who view the mural.

A contrasting—but no less beautiful—work of art can be found along Belilios Lane in Serangoon. Painted by local artist Psyfool, this work of street art depicts traditional trades that were practised by the South Asian community in the area, such as parrot astrology (a form of fortune-telling popular among the Tamils of Tamil Nadu), linen-washing and garland making.

“Traditional Trades of Little India” by Psyfool. Wall of side alley along Belilios Lane, Singapore 219955. 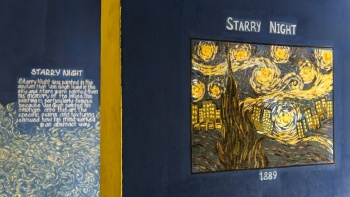 You don’t have to visit the Louvre or the Museum of Modern Art to find artistic inspiration. Instead, take a stroll through Singapore’s heartlands, starting with the Housing & Development Board (HDB) estates of MacPherson. The neighbourhood was named after Lieutenant Colonel Ronald MacPherson, who designed the beautiful Saint Andrews Cathedral.

At the void deck under one of the blocks at Pipit Road, you’ll come face-to-face with a reproduction of Van Gogh’s Starry Night. Painted by art collective Social Creatives, the mural has earned a Special Community Project Award, and is part of an initiative to turn public spaces in housing estates into art galleries for the public.

Social Creatives’ chief executive Faris Abdulkadir Basharahil has drawn parallels between wall murals and cave paintings, highlighting the long history that art has as a form of fundamental communication.

Find out how towns in Singapore are planned by visiting the Housing & Development Board's in LIVINGSPACE Gallery Toa Payoh. 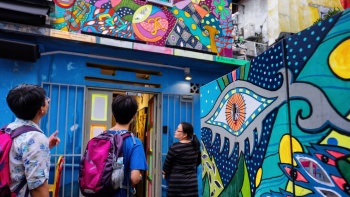 Tucked away in Haji Lane, Blu Jaz Café is a much-beloved watering hole that hosts a range of DJs, jazz artistes and live music aficionados. You’ll want to do some window shopping before beginning your mural hunt at the walls surrounding the bar, which is adorned with art that takes inspiration from Central America.

Another notable location includes the wall of The Singapura Club, which is spray-painted with a 15-metre-high mural of a turbaned man, drinking chai. Painted by local street artist, Ceno2, the mural references the heritage of the Arab Quarters. 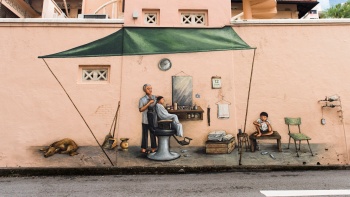 Take a walk along memory lane (quite literally) at the laidback little enclave of Everton Park. Just opposite Everton Road lies Blair Plain, a conservation area consisting of a handful of shops and terraces. The walls here have been enlivened with murals by contemporary artist Yip Yew Chong, depicting scenes of street barbers, Chinese domestic workers and old-school provision shops.

Fun fact: The mural depicting the elderly washerwoman was repainted by the artist for authenticity, after he was told that the grooves in traditional washing boards did not cover them entirely.

Hunting for inspiration at Tiong Bahru

A 2-day guide for aspiring artists