This Indian specialty is pleasing to the palate and the eye. Watch the prata-maker stretch the dough by slapping and swinging it in one skilful motion.

A fluffy Roti Prata with curry is the perfect way to ease the hunger pangs. 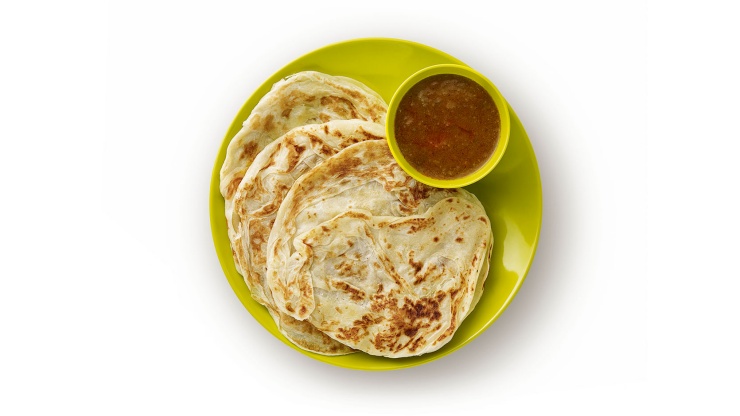 This savoury, belly-filling dish is crispy on the outside and soft on the inside, but tasty throughout.

Close up shot of roti prata with a fork. 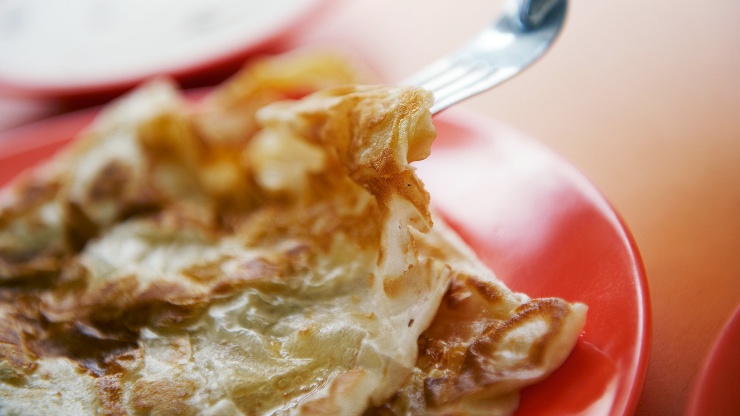 While you certainly can eat prata with a fork, true blue locals tend to eschew cutlery and use their fingers. Don’t be shy to try it out for yourself!

Crispy on the outside, soft on the inside, roti prata hits the spot every time. A South-Indian flat bread made by frying stretched dough flavoured with ghee (Indian clarified butter), it is usually served with fish or mutton curry.

Roti means 'bread', and prata or paratha means 'flat' in Hindi. Some believe the dish evolved from original pancake recipes from Punjab in India, but across the causeway in Malaysia, the flat bread is called roti canai, which some say is a nod to its origins from Chennai.

No matter where it comes from, roti prata is a satisfying meal for any hour of the day. While the classic versions are served plain or with eggs as a filling, local menus now feature a variety of modern variations such as cheese, chocolate, ice-cream, and even durians – turning it from a main course to a dessert.

Between the many prata stalls in Singapore, many opening till late in the night, the texture of the dough differs - ranging from soft and chewy to super crispy, with most being somewhere in the middle of flaky and fluffy.

The most difficult part of prata-making is stretching the dough, and it is a sight to behold. Watch how the prata-man whirls and twirls the dough until it is paper thin and four or five times larger than the original piece. After folding this thin piece into a rectangle, he cooks the prata on a greased griddle.

The recommended way to eat it: dig in with your fingers!

If you hear a customer asking for a ‘tissue’ at a prata store, they’re not asking for serviettes. A tissue prata is an exceptionally thin version of the dish, served with evaporated milk and sugar.